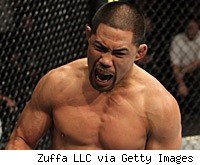 LOUISVILLE, Ky. – Mark Munoz has never been shy about saying his standup is far from the best part of his MMA game – odd for a guy who had finished nearly half his fights courtesy of his hands.

Maybe he'll start giving them a little more credit now. Thursday night in the co-main event of the UFC on Versus 3 card, Munoz needed just 54 seconds – and three big bombs – to shut down CB Dollaway.


Dollaway felt it – a big right to the chin that sent him down, and a pair of follow-up hammer fists on the ground that turned out the lights and were enough for Mario Yamasaki to stop it.

Dollaway was up not long after the shots on the ground that gave Munoz the win, and was protesting the stoppage to Yamasaki – much like many of the more than 8,300 fans in attendance at the KFC Yum! Center, who booed the stoppage.

But Munoz said he believes Yamasaki's decision was the right one. And UFC president Dana White, sitting cageside, said on Twitter he believed Dollaway was out and the call was a good one.

"I thought it was appropriate – I landed two hammer fists that were pretty hard," Munoz said. "I like CB. I didn't want to do any more damage to him. But I don't think (the fans booing) took away from anything. To win in that fashion – it's an unbelievable feeling to win on that stage. So I was real happy."

Munoz, an All-American wrestler at Oklahoma State, has now been in three straight bouts against fighters with wrestling as their base. After a split decision loss to Yushin Okami last August, Munoz now has wins over elite-level wrestlers Aaron Simpson and Dollaway.

Munoz said he's been working his standup game more than anything else, hoping it will give him an advantage over the wrestlers he's been matched up against – though he'd prefer to fight anyone but another wrestler his next time out.

"A fight's a fight," Munoz said. "I'm going to go out there and just do what I do. I've been working on my weaknesses and making them my strengths. I'm always going to say my standup is my weakness, and I go real hard and I work strictly on my striking every day. I incorporate it into my MMA. I have unbelievable training partners around me, and it's awesome to be able to see the improvement every day."

It's all part of Munoz's growth as an overall fighter – someone who seems to have come a long way since his UFC debut two years ago. In that fight, at UFC 96, Munoz faced, not surprisingly, a wrestler – Matt Hamill. Hamill kicked Munoz so hard in the head he needed to be taken from the arena in a neck brace on a stretcher.

Hamill caught him in the right place at the right time, but 2011's Mark Munoz says the evolution of his game is what has been most important to him.

"At first, I was just strictly a wrestler, throwing bombs with reckless abandon," Munoz said. "Now I'm getting more pinpoint on my striking and starting to utilize my jab a little more, and it's starting to set up my takedowns a little more. (Before) I'd just shoot in and expect to take people down, but ... MMA wrestling and pure wrestling is totally different. I've got to be able to weave those things in and be a more well-rounded mixed martial artist."