Falling Action: Best and Worst of UFC on Versus 3 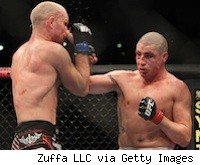 There are those who would argue that you can tell who won a fight by looking at each participant's face when it's over. They're usually the same people who think takedowns are worthless and jiu-jitsu is some vague form of cheating, so don't listen to them.

Except just this once they seem to have a point. Both Diego Sanchez and Martin Kampmann took some damage in the main event of UFC on Versus 3, but it was Sanchez whose face looked like a Picasso that had been left out in the rain by the time it was all over. And you're telling me this guy won?

He did on the judges' scorecards, anyway, even if he might have had a hard time convincing the nurses in the hospital of that fact. Since the enduring images from that fight are likely to be ones of a deformed and bloodied Sanchez, it's hard not to wonder if MMA fans will be any less skeptical.

Now on to Thursday night's biggest winners, losers, and everything in between.

Biggest Winner: Diego Sanchez
Whether you agree with the decision or not, you have to admit that Sanchez won this fight the same way a child convinces you to take him for ice cream: by never, ever giving up. Even when his charging bull approach only succeeded in getting his face pounded into an unrecognizable mass of future scar tissue, he kept coming. He was certainly the more aggressive fighter, even if he wasn't the more effective one (more on that in a moment). I think we've seen the limits of Sanchez's technical ability by now, and we saw them again on Thursday night. What he still does best, however, is keep the pressure on without showing any regard for his own safety. Some nights that's enough. Thursday just happened to be one of those nights.

Biggest Loser: C.B. Dollaway
What's worse than getting knocked silly in the first minute of the first round? Getting up and acting like you didn't get knocked silly in the first minute of the first round, when we all saw quite clearly that you did. Dollaway's a warrior so he didn't think so, but Mario Yamasaki made the right call. Dollaway might have been able to continue, but he was definitely separated from his senses for a moment or two and you can't blame a ref for erring on the side of caution in that case. Just when Dollaway seemed to be gaining some momentum with a three-fight win streak, Munoz's right hand stops him cold. It would almost be enough to make you feel sorry for the guy if you had never heard one of his interviews.

Most Justifiably Upset: Martin Kampmann
I wouldn't call it a robbery, but after re-watching the final two rounds I'm convinced that Kampmann deserved to win that fight. It's not just because he's the only fighter whose face didn't look like a half-melted jack-o-lantern by the end of that bout, either. It's because, while Sanchez was coming forward and firing off the big flurries, it was Kampmann who was landing with greater efficiency. At first glance, Sanchez appeared to be doing more, but when you look closely you see that most of those punches weren't landing. Kampmann shut down all his takedown attempts except one, and even then he was back on his feet before you could say 'Danish Thai boxing champion' (for at least the sixth time). When you combine all that with the invasive surgery he performed on Sanchez's face, you can understand why he felt slighted by the judges. He might be the best UFC fighter who's currently 0-2 in his last two outings.

Most Sudden Reversal of Fortunes: Shane Roller
Having a right hand like that is sort of like walking around with a lottery ticket in your pocket: even if your car's up on blocks and there are holes in your shoes, you're no more than a second or two away from turning it all around. Roller seemed well on his way to defeat after the first round, and things weren't going that much better at the start of the second. His preferred method of charging straight in seems like a great way to get hurt very badly by some of the more experienced fighters in the division. And yet, all it took was one well-placed punch to turn his after-party from an Irish wake-style drinking binge into a legitimately celebratory drinking binge. The hangover is pretty miserable from both.

Least Impressive in Victory: Cyrille Diabate
He does know that MMA fans (not to mention promoters) prefer it when you finish fights, right? He was clearly outclassing Steve Cantwell on the feet, yet had zero sense of urgency about putting him away. Sure, he seemed to be tiring down the stretch, but if you can't go three hard rounds, shouldn't that be more of a reason for you to get serious about finishing a guy off when you've got him hurt?

Brightest Prospect: Chris Weidman
If we keep in mind that this was only his fifth pro fight, then we have to be impressed with how well Weidman handled a UFC vet in Alessio Sakara. He took "Legionarius" down when he needed to and didn't even seem all that out of his element on the feet. Of course, we could argue that he lacks the ability or the impulse to finish a fight, or that he's a little too content with simply holding a guy down, but give him a break. His ground-and-pound was good enough to slice open Sakara's forehead, and it's not easy to get a grip on a Roman warrior who's covered in blood and sweat. Weidman still needs some seasoning, but he's off to a great start.

Most Precipitous Decline: Joe Stevenson
Joe "Daddy" has now lost three in a row, with each defeat coming against someone a little lower of the totem pole. If he were 36 we could throw our hands up and rattle on about the ravages of age and the unwinnable battle against Father Time and etcetera, etcetera – but Stevenson is 28! Three years ago he fought for the UFC lightweight title. Less than two years ago he was beating guys like Nate Diaz and Spencer Fisher. Now he can't win a Facebook prelim on a Thursday night fight card? That's a rough, not to mention fairly sudden fall. Now we wait to find out whether the UFC seems something worth salvaging in him.