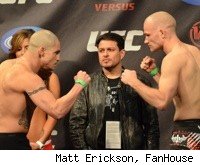 LOUISVILLE, Ky. – This is the UFC on Versus 3 live blog for Diego Sanchez vs. Martin Kampmann, the welterweight main event at the KFC Yum! Center in downtown Louisville, Ky.

Sanchez snapped a two-fight skid at UFC 121 in October with a Fight of the Night unanimous decision win over Paulo Thiago. At the same event, Kampmann (17-4, 8-3 UFC) lost a close split decision to Jake Shields, who earned a shot at champion Georges St-Pierre next month in the process.

Round 1: Both fighters look amped up as they meet in the middle, and Kampmann touches Sanchez's chest with the glove touch. This has the potential for a great fight. each fighter fakes some jabs, and Kampmann follows with a combo that Sanchez blocks. Kampmann ducks under a Sanchez right. A right from Sanchez misses again. Kampmann has the center of the cage and is pushing Sanchez outside. Sanchez shoots for a takedown, but Kampmann stuffs it and they tie up along the fence, where Kampmann lands a nice right knee. Then he drops Sanchez back in the middle of the cage with a right. Sanchez gets back to his feet in time to be tied up. He recovers and tries for a single-leg, but it's not there and tehy separate and go back to the middle. They clinch again, and Kampmann lands a nice knee to the midsection. back in the middle, he lands a couple nice jabs on Sanchez's chin. Sanchez shoots, and Kampmann has a perfect sprawl to stuff it, then ducks out of a Sanchez hook. Sanchez is bloodied. The two trade shots, but Kampmann appears to be getting the better of them. Again, Sanchez looks for a takedown, and again Kampmann stuffs it. He just misses a big knee as the round winds down. MMA Fighting scores the first round for Kampmann, 10-9.

Round 2: Sanchez shoots for an early single and Kampmann defends. Sanchez shoots in again close to the cage, and Kampmann ties him up. Short flurry of punches from each guy, then a right uppercut from Sanchez just misses. Sanchez eats a right, but follows with a right of his own – his best punch of the night. Sanchez's face is really beat up already. They clinch on the fence, and then break. A woman in the crowd yells out the always popular "Hit him in his throat." As Sanchez shoots again and is stuffed again, a short "Diego!" chant comes up in the crowd. Then the crowd erupts as Sanchez comes forward, seeing that he has opened up a cut near Kampmann's right eye, and he fires off a big exchange. Sanchez shoots again, this time in the middle, and again Kampmann defends. Another quick flurry in the middle has both fighters landing. Then again. Sanchez shoots for a single, and again it's not there. But he throws a flurry late in the round and lands some. He throws a knee and slips as the horn sounds, and pops right back up ready to go again. It's a close round, but MMA Fighting will give it to Sanchez 10-9 – he seemed to be coming forward just a little more.

Round 3: It's hard to imagine either fighter's corner telling them they can cruise here. Round 2 was probably too close for Kampmann's team to tell him he won it for sure. And Sanchez has to be thinking the fight is even at best. Could see a lot of crazy exchanges this round. Sanchez again shoots, and again Kampmann stuffs. That's perhaps the story of the fight so far. Sanchez throws a big right that lands, then a combination that has Kampmann backing up for a moment. Another shot for Sanchez, another stuff for Kampmann, who waits to see if Sanchez will take his hands off the mat to eat a knee. They split up and go back to throwing bombs. Sanchez just misses with some as the sweat flies. He misses a big right hook, then finally gets his first takedown of the fight. Kampmann gets up pretty quickly, though, and the two trade jabs. With 90 seconds left, Sanchez lands a few flurries, and Kampmann is backing up. Sanchez comes forward again with a minute left and lands some big shots. The crowd erupts. With that and the takedown, Sanchez has won the round and will have to cave to lose it, one would think. But he is severely bloodied now. He keeps coming forward, and with 10 seconds left he keeps chasing Kampmann down. They embrace in the middle for a heck of a fight, and almost certainly your bonus winner. MMA Fighting gives the third to Sanchez 10-9 and the fight to him, 29-28. But this one smells like a split decision from all the way across the Ohio River.