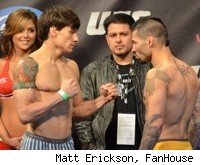 LOUISVILLE, Ky. – This is the UFC on Versus 3 live blog for Brian Bowles vs. Damacio Page, a bantamweight main-card rematch at the KFC Yum! Center in downtown Louisville, Ky.

Bowles (8-1, 5-1 WEC), the former WEC bantamweight champion, is fighting for the first time in a year. Last March, he lost the title in his first defense when doctors stopped it after two rounds due to Bowles having a broken hand. He also broke his hand in his title-bout win over Miguel Torres at WEC 40 in April 2009. This will be Bowles' UFC debut.

Page (12-5, 3-2 WEC) is also making his UFC debut. He is coming off a third-round submission loss against Demetrious Johnson at WEC 52 in November. That loss snapped a two-fight winning streak.

Bowles and Page fought each other at WEC 35 in August 2008. Bowles won the Submission of the Night bonus with a first-round guillotine victory. Bowles' first eight career fights, all wins, all ended with stoppages.

Round 1: Page throws a big haymaker early, then flies in and lands a kick and a knee that has Bowles backing out. Perhaps a good strategy to get right in the face of someone who hasn't been in the cage in a year. Then a jumping kick from Page to Bowles' body that smacks through the arena. Bowles won the first fight between these two about two and a half years ago by submission; Page wants payback, and he's given Bowles a huge welt on his side to think about. Another flying knee attempt for Page, who follows it with two big looping punches that just miss, then a knee that just misses. Page continues to land kicks and jabs. Bowles finally answers with a couple shots and ducks out of another haymaker. Then Bowles lands his own big shot that drops Page. He pounces and lands ground and pound. Then he gets in and throws on a guillotine – same thing he beat him with their first meeting. Page isn't going to tap. And soon, he's asleep. The ref jumps in to shut it down. Page is not a happy camper when he gets back to his feet. Crazily, the end comes at 3:30 with a guillotine – which is the exact move and precise time of finish of their first meeting.