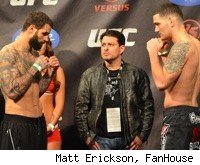 LOUISVILLE, Ky. – This is the UFC on Versus 3 live blog for Alessio Sakara vs. Chris Weidman, a middleweight main-card bout at the KFC Yum! Center in downtown Louisville, Ky.

Sakara (15-7, 1 NC, 6-4, 1 NC UFC), who trains at American Top Team, comes into the bout with a three-fight winning streak. He knocked out James Irvin last March at the UFC's first Live on Versus card. Sakara has been on the shelf for nearly a year, despite several booked bouts, due to his father's death, an injury and a bad case of the flu at UFC 122 in November.

Weidman (4-0) is Sakara's third opponent for the card – Maiquel Falcao and Rafael Natal both pulled out with injuries. An All-American wrestler at Hofstra, Weidman trains with former UFC welterweight champion Matt Serra in New York and is Ring of Combat's middleweight champion.


Round 1: Weidman is one of the most heralded UFC newbies in a while. He opens with a kick attempt. He comes forward hard, but misses. He's a protege of Matt Serra and Ray Longo, who are in his corner tonight. He throws a kick that Sakara nearly catches. Then he blocks a couple shots from Sakara. Weidman throws a nice kick and tries to transition to a takedown. It's not there. Nice right from Weidman. He again blocks a right from Sakara. He blocks some more of Sakara's rights and lefts. The crowd chants "USA!" for Weidman, from Long Island, New York, and an All-American wrestler at Hofstra. He looks for another takedown. It's not there, and Sakara ties him up in a clinch against the fence. Weidman just misses a big right elbow on the break. Then he comes in with a combo, but eats some shots to the body in the process. Sakara is bloodied near his right eye. Again, Weidman tries to shoot, and again Sakara stuffs it. Not a ton of action as the round closes out. Weidman gets the first on our card 10-9, as he's clearly winning the striking battle.

Round 2: Left jab to open from Sakara. Then another sneaks through. Finally, Weidman gets his first takedown. There's not much on it, but he has the fight on the ground where he told MMA Fighting earlier in the week he wanted it. Weidman lands some nice ground and pound, and a big elbow opens up on Sakara's head. Weidman is in side control and landing short punches and elbows. Sakara tries to wriggle out, but this is exactly where Weidman wants to be. Sakara manages to get back to half-guard, and then rolls out and gets back to his feet. Sakara lands a kick, but Weidman gets a double-leg and drops him right back down to the ground against the fence. Weidman has things in control in his own corner, and the ref breaks them so a doctor can check Sakara's cut. He cleans him up, and they go back to work. The stoppage is good for Sakara, who now won't have as much blood near his eyes, and he's out of the clinch. But soon after, he's got blood covering his nose. Could make an argument for a 10-8 round, but we'll give it to Weidman 10-9.

Round 3: Some good shots to the body from Sakara, but Weidman backs nicely back out. He shoots for a double and gets the takedown, winding up in side control once again. Weidman lands some short punches from the top, but nothing too damaging. It's a little dull, but gives us a chance to realize the ref is wearing black Nike cross trainers – and I don't think I've seen that before. But back to work. The ref, who looks like a smaller Brock Lesnar, stands them up. Serra yells for Weidman to shoot and put Sakara back to the cage. He does immediately, and it works. Again in side control with 1:45 left, Weidman has this on cruise control. Despite being a UFC newcomer with only four pro fights, he was a -250 favorite coming in against a longtime UFC veteran (though Sakara has been on the shelf for a year). Sakara gets back to the feet with 30 seconds left, but Weidman just puts him back on the mat again to close things out. It's another easy 10-9 round for Weidman, and we give him the fight 30-27 in his debut.