UFC on Versus 3: Brian Bowles Chokes Out Damacio Page 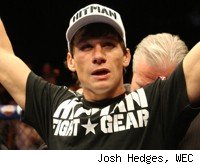 Stepping into the cage for the first time since losing his bantamweight title a year ago, Brian Bowles choked out Damacio Page Thursday at UFC on Versus 3 -- and likely felt some deja vu in the process.

Bowles finished Page with a first-round guillotine choke at 3 minutes, 30 seconds when the two fought in a WEC bout in 2008. That's exactly how Bowles won this time as well: He choked Page out at the 3:30 mark.

It was an intense, action-packed fight. Page, who's known for his exciting fighting style, came out swinging wildly, and he connected with some hard shots in the early going. Bowles, however, took control when he caught Page's kick and knocked him down with a punch, and when Bowles followed Page to the ground he sunk in a guillotine choke.

It was a good showing for Bowles, who improves his record to 9-1 and has to be considered among the elite bantamweights in the sport. And it was a solid showing in defeat for Page, who falls to 15-6 but showed just how exciting the little guys can be -- even when their fights don't last very long.