Sanchez vs. Kampmann Earns Fight of the Night at UFC on Versus 3 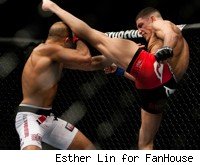 LOUISVILLE, Ky. – The UFC handed out its customary post-fight bonus awards on Thursday following UFC on Versus 3. Four of its fighters are a little richer.

Diego Sanchez and Martin Kampmann each took home $60,000 extra for their Fight of the Night performance in the main event at the KFC Yum! Center in downtown Louisville, Ky. The event was the UFC's debut in Kentucky. Those totals were $20,000 extra, decided by UFC president Dana White.

Brian Bowles and Shane Roller each won $40,000 for their stoppage wins – Bowles for Submission of the Night, Roller for Knockout of the Night.

Sanchez and Kampmann fought to a thrilling decision that saw both fighters bloodied through much of the fight. When the 29-28 unanimous decision scores were announced for Sanchez, much of the crowd booed the result. Kampmann, who said after the fight he may have broken his hand, told Joe Rogan he thought he won all three rounds. Sanchez said he thought the difference was a third-round takedown and the pressure he put on the last two rounds.

Sanchez has now won two straight in the welterweight division after moving up from lightweight. He lost his return to the division against John Hathaway. Kampmann drops his second straight after a split decision loss to No. 1 welterweight contender Jake Shields last fall.

Bowles returned from a year-long absence to submit Damacio Page in a rematch from a fight two and a half years ago. And in a true rarity, Bowles survived an early onslaught from Page to catch him in a guillotine – the same way he beat him their first meeting, and in the same time: 3:30 of the first round.

Roller, too, had to make a comeback to win his bonus money. He was losing to Thiago Tavares through the first round. But in the second, he landed a monster right hand that put Tavares out. Roller has now won two straight; the fight was his UFC debut after moving over from the WEC.