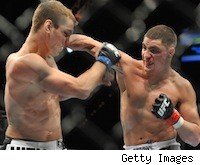 The main event at UFC on Versus 3 was a wild one, as Diego Sanchez, his face a bloody mess, pulled out a unanimous decision win over Martin Kampmann.

Sanchez was getting pummeled in the early going, and he ended the fight with cuts all over his face and two badly swollen eyes, but he noted in his post-fight interview that he had hurt Kampmann as well.

Sanchez wasn't satisfied, and neither were most of the fans in Louisville, who cheered loudly when Kampmann said, "I think I won the fight."

In the early feeling out process Sanchez tried and failed to take Kampmann down, and that seemed to frustrate Sanchez. Kampmann landed a big right hand about a minute and a half into the first round, knocking Sanchez to the ground. Sanchez got back up quickly, but he tried to take Kampmann down again, this time taking a knee to the chops for his trouble.

With two minutes to go in the first round Sanchez had blood dripping out of his mouth and Kampmann was in complete control, avoiding all of Sanchez's takedown attempts and continuing to pepper Sanchez with strikes. It was a very good first round for Kampmann.

Sanchez continued to press for takedowns in the second round, and Kampmann continued to stuff every attempt. It wasn't until beyond the halfway point of the second round that Sanchez finally started to have success, and that was only after he stopped going for takedowns and started trying to turn the fight into a wild brawl: That's when he landed some hard punches and drew blood on Kampmann's right eye. Sanchez also ended the second round with a flurry, and that might have been enough for him to win the round.

After a long period of trading strikes in the third round, Sanchez finally succeeded in landing a takedown, but it didn't do any good, as Kampmann got right back up. Going for takedowns was clearly a big part of Sanchez's game plan, but it was a lot less effective in this fight than just swinging wildly.

Swing wildly Sanchez did in the final minute of the fight, and when Kampmann tried to swing wildly back at him, Kampmann appeared to injure his right hand. As the fight came to an end both men had badly bloodied faces, and as they waited to hear from the judges it was a fight that could have gone either way.

The three judges scored it for Sanchez, who improved his record to 23-4, but it just as easily could have gone for Kampmann, who falls to 17-5. Don't be surprised if Sanchez and Kampmann meet in the Octagon again. These are two well-matched fighters who put on a great show.