Who Won Fitch-Penn Bout? Choose Your Own Questionable Rationale 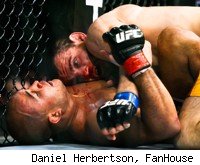 It's possible that seeing what you want to see is a necessary part of the fighter mindset. It's also possible that, with something like a pro fight, where there's money and honor at stake, being personally involved makes it impossible for you to be objective.

How else could Jon Fitch take to his Facebook page this week and declare himself not only a clear winner over B.J. Penn at UFC 127, but a victor over the "best BJ ANY of us have ever seen"?

As Fitch saw it, rounds two and three were clearly his. Round one? That was a draw in Fitch's eyes. As in, the round where he was taken down, gave up his back, and spent most of it simply trying not to get choked. Yep, a clear 10-10 round against the greatest Penn ever, if you ask Fitch.

Obviously, Fitch isn't exactly an objective observer in all this. If he were, he might have to admit that getting swarmed on in the first and having his nose smashed in the second was not to his advantage on the judges' scorecards. Sure, he managed to end up on top a couple of times in those first two rounds, but primarily by turning into Penn's guard after he'd given up his own back. Even then he mostly failed to capitalize on the position.

But Fitch isn't the only one whose judgment is colored. Take Matt Hughes, for example, who was Penn's sparring partner before this bout.

Hughes wrote on his blog this week that he had Penn winning the first two rounds, and Fitch winning the third. As for the suggestion that the final frame might have been a 10-8 for Fitch, who spent nearly five full minutes bouncing Penn's head off the mat like a basketball?

Wrote Hughes: "He gets a takedown early and lays on BJ the rest of the fight. I do think BJ did a good job avoiding strikes and it was a little disappointing seeing Fitch not do anything to try to end the fight. That round to me was a 10-9 round for Fitch. A lot of people don't understand the judging criteria, in boxing you can give a 10-8 round pretty easily because there are a lot more rounds. In fighting you just can't do that. With 3 rounds to judge, a 10-8 has to be a pretty dominant round. With Fitch doing nothing to end the fight, that was not a 10-8 round, in my opinion."

To put that in perspective, Hughes is arguing that a round in which Penn laid flat on his back, getting his face battered by punches and elbows, offering nothing that even resembled an attempt at offense, should be scored the same as a round where one takedown here or there was the only deciding difference.

His rationale seems to be that it doesn't matter whether you win the round by a little or a lot – if you don't come close to ending the fight, it all should be weighted the same on the scorecards.

UFC president Dana White seems to agree, telling ESPN.com that while Penn took a beating in round three, it wasn't a 10-8 kind of beating.

"Personally, I scored the first two rounds for Penn and had him winning the fight. There's no doubt B.J. got pounded in the third round, but that wasn't a 10-8 round."

So then, what was it? It was obviously a more dominant round than either of the first two, but the current scoring system doesn't allow for too many varying shades of dominance.

You can argue that Fitch wasn't close enough to ending the bout to justify a 10-8, but you can't argue (at least, not convincingly) that he didn't put a more serious whooping on Penn in that final frame than anything Penn had done to him in the prior two.

The people who think Penn deserved a 29-28 decision victory have to reconcile that claim with the image of a battered, deflated Penn finishing the fight on his back and doing little to stop the punishment that was raining down on him.

On the flip side, the people who think Fitch won have to do some fuzzy math with the first two frames to make it seem at all plausible even with a 10-8 in the final round.

The fact that you can make compelling arguments in both directions probably just reaffirms that a draw was the right call in the end. Or, maybe it tells us that we need a 'sudden victory' round like they have on "The Ultimate Fighter," or perhaps even a scoring system other than the one that was created for ten or twelve-round boxing matches.

All we can say for sure is, if no changes of the sort are made, get ready to have this same conversation again and again.