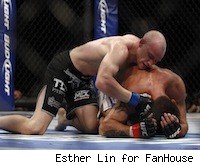 As MMA personalities go, Martin Kampmann is a polar opposite from his UFC on Versus 3 opponent Diego Sanchez. While Sanchez is often verbose, introspective and commands the spotlight, Kampmann is concise, restrained and falls into the background. But put him in a cage, and the power hinted at by his "Hitman" nickname starts to come out.

In fact, a case can be made that Kampmann has faced the strongest list of welterweights of any fighter in the world over the last two years, including matchups with Carlos Condit, Paul Daley, Paulo Thiago and Jake Shields. Amazingly, those four had a higher combined win percentage (80.4 percent) at the time they faced Kampmann than UFC champ George St. Pierre's opponents in that time span had before facing him (77.5 percent).

Last October, Kampmann was just a hair away from ending Shields' 14-fight win streak, losing in a controversial split decision. Kampmann rarely gets animated in media interviews, but discussing that pivotal loss brings out some of the fire in him.

"I think training for the fight was was pretty good and I knew his game is to get people down and just kind of lay on them, so I was prepared for it," he said in a recent teleconference. "I just made some bad decisions in the fight. And sometimes in the heat of the moment, you make some mistakes, you know? I was a little bit too tentative in the standup. I was worrying too much about the takedown. And when I was on top, on the ground, I was trying too hard to submit him and I gave up top position a couple times. I was too eager to finish and I should've just stuck to punching him some more in the face. I think I could've won the fight and I figured, 'You know what? I should've won the fight, but I gave it away doing stupid mistakes.' But I learn and move on."

His rebound fight is no walk in the park, coming against one of the most tireless fighters in the division, Sanchez, who himself snapped a two-fight losing streak during the same UFC 121 card that saw Kampmann fall to Shields.

Kampmann (17-4) is considered a slight favorite in the fight.

"I don't think the odds matter so much," he said. "It's still a fight, you know? Diego, he seems like a very motivated person and those guys are tough to fight. He always brings it and I admire his tenacity in the cage. I'm definitely expecting a tough fight and that's what I want. I'm prepared to haul for a tough, three-round war and can't wait to get in there. But the odds, that doesn't help you in the ring. You've got to trust in yourself."

Sanchez (22-4) is considered more well-rounded than Shields, who often looks uncomfortable in the standup and is usually hell-bent on getting the fight to the ground. While Sanchez spent much of his recent years working on his standup, he hinted that his return to Greg Jackson's camp in Albuquerque, New Mexico, would mark a return to the Sanchez who used a similar game plan to Shields: getting the fight to the ground.

If that is the case, Kampmann's work in preparing for Shields could pay dividends in this fight.

"From my Jake Shields fight, I've been working a lot of takedown defense and I expect Diego to try to come in and take me down," he said. "And you know, of course I don't want that to happen. I'm prepared for that and so in that way, that helped me. But I'm preparing for a hard fight. Wherever the fight goes, I'm ready."

Kampmann credits Sanchez with being more explosive and tenacious than Shields and having a better gas tank. But the fight differs from the Shields fight in one key way: if Sanchez can't get the fight down, he still has good enough standup to make it a dogfight.

That's fine with Kampmann, who says he's ready to go anywhere and everywhere to come out with a win.