UFC on Versus 3 Weigh-In Results 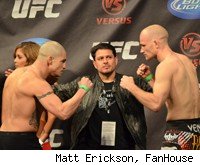 LOUISVILLE, Ky. – The 22 fighters for Thursday's UFC on Versus 3 card hit the scales Wednesday in Louisville, Ky., and all of them made their required weights. The weigh-in event for the UFC's debut in the Bluegrass State took place at the Kentucky International Convention Center in downtown Louisville.

Main event fighters Diego Sanchez and Martin Kampmann each weighed in at 171 pounds for their welterweight bout. In the co-main event, former Division I All-Americans CB Dollaway and Mark Munoz meet in a clash of elite wrestlers. Dollaway weighed 185 for the middleweight contest; Munoz was 186.

Two fighters needed to remove their shorts completely in order to make their limits. Bantamweight Damacio Page weighed in at 136 on his second try for his fight with former WEC champion Brian Bowles. And Reuben Duran also needed a second attempt to make 136 for his fight with Takeya Mizugaki.

The main card for UFC on Versus 3 airs live on Versus at 9 p.m. Eastern on Thursday. The preliminary card fights between Steve Cantwell and Cyrille Diabate and Joe Stevenson and Danny Castillo will be streamed live on the UFC's Facebook page starting at 8 p.m. Eastern.

The complete weigh-in results are below.