UFC on Versus 3 Predictions 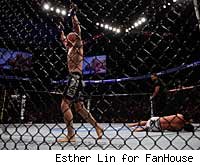 Five days after the UFC left off in Sydney, Australia, it will pick up in Louisville, Ky., for its third night of fights on Versus, with a main event featuring welterweights Diego Sanchez and Martin Kampmann squaring off. We've got the full preview and predictions right here.

What: UFC Live: Sanchez vs. Kampmann

When: Thursday, the non-televised undercard begins at 6 PM ET and the live Versus card starts at 9.

Diego Sanchez vs. Martin Kampmann
Both of these guys are coming off impressive performances at UFC 121: Sanchez soundly beat Paulo Thiago, while Kampmann lost a close split decision to No. 1 welterweight contender Jake Shields. The winner of this one can make a strong statement that he's closing in on welterweight title contention.

So who will the winner be? It's a tough fight to pick, as both guys are well rounded and able to finish fights on their feet or on the ground, but I see this fight going down mostly on the feet, and Kampmann to win most of the exchanges and come away with a close decision.
Pick: Kampmann

C.B. Dollaway vs. Mark Muñoz
Dollaway is on a three-fight winning streak and won a Submission of the Night bonus in his last fight, a win over Joe Doerksen in September. So you might say the former Ultimate Fighter cast member is on a roll. But I'd prefer to say Dollaway is just beating the guys he should beat: Three wins over Doerksen, Goran Reljic and Jay Silva aren't exactly setting the world on fire.

Munoz is on another level from those three. An NCAA champion wrestler whose stand-up is steadily improving, Munoz is the best opponent Dollaway has faced in his MMA career, and I expect Munoz to control Dollaway for 15 minutes and win a one-sided decision.
Pick: Munoz

Alessio Sakara vs. Chris Weidman
Sakara has fought just twice in the last two and a half years, missing fights because of injuries and illnesses, and it's hard to know what kind of shape he'll be in. But if he's in any kind of shape at all I think he should be able to beat Weidman. The 26-year-old Weidman is a fine prospect, but he has just four pro fights, all in the Ring of Combat promotion, and is only on this card because the UFC needed an opponent who would take a fight with Sakara on short notice.
Pick: Sakara

Brian Bowles vs. Damacio Page
Bowles will be stepping into the cage for the first time in 362 days -- he last fought on March 6, 2010, when he lost the WEC bantamweight belt to Dominick Cruz. Hand and foot injuries have kept him out of the cage since then, and the biggest question facing Bowles is whether he'll be 100 percent healthy, and whether ring rust will be a factor.

But as long as Bowles is ready to go, he should handle Page. These two fought once before, in 2008, and Bowles submitted Page in the first round. I see an early stoppage this time as well, with Bowles winning this time by TKO.
Pick: Bowles