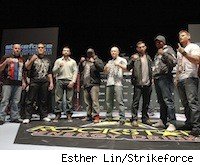 The great thing about a tournament is that it gets more exciting as it goes along. Whether it's March Madness or Wimbledon or (as we're about to talk about) an eight-man MMA grand prix, each round gets you more enthused about the next.

No, Strikeforce has decided that the next two tournament fights, Alistair Overeem vs. Fabricio Werdum and Josh Barnett vs. Brett Rogers, will take place on June 18. And there goes all the momentum the first tournament event achieved.

Four months between the first pair of quarterfinal fights and the second pair of quarterfinal fights is an absurdly long wait. It's absurd for Antonio Silva and Sergei Kharitonov, both of whom were healthy and ready for a quick turnaround after their quarterfinal victories, to have to wait more than four months to find out who they're facing next. Fighters who come off a big win healthy and ready to go should get back in the cage quickly.

Silva and Kharitonov will have to take several months off and let the ring rust set in -- or take fights outside the tournament, which would open a whole new can of worms. Kharitonov has already said he'd like to fight before his semifinal bout, but that carries significant risks: If he loses, would he remain in the tournament? If he suffers an injury, would the tournament be delayed even further while we wait for him to heal?

It's also an absurdly long time for Overeem, Werdum, Barnett and Rogers to have to wait. For Werdum in particular, it's stunning that Strikeforce will be waiting almost a full year to get him back into the cage after the signature win of his career, over Fedor Emelianenko on June 26, 2010. A fighter coming off a big win shouldn't be shelved for a year.

None of this makes sense. Strikeforce was in a great place after their first two tournament fights. It's inexcusable that they've now dropped the ball before the next two fights.