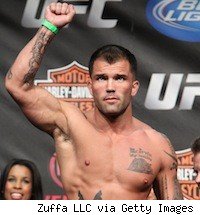 Former UFC fighter James Irvin has had his fighter's license suspended by the California state athletic commission after a positive test for a banned substance.

A statement released by the CSAC on Wednesday said Irvin tested positive for epitrenbolone metabolite of trenbolone, an anabolic steroid. The test came from a Dec. 2, 2010 Tachi Palace Fights event in Leemore, California. In his bout, Irvin lost via submission.

it's the second time Irvin has failed a drug test. In 2008 after a fight with UFC middleweight champion Anderson Silva in Nevada, Irvin tested positive for painkillers methadone and oxymorphone and served a nine-month suspension.

According to the commission, Irvin's most recent test was observed in the presence of a CSAC representative and the sample was sent to the World Anti-Doping Agency test facility at UCLA.

The 32-year-old Irvin is 15-8 with 2 no contests in his career, fighting in weight classes ranging from middleweight to heavyweight. He made his UFC debut in 2005 with a knockout loss to Mike Kyle, and in multiple stints with the promotion went 4-6.

Irvin has won just once in his last six fights.

The illegal substance detected by the test, trenbolone, was developed as a veterinary steroid and is generally used for livestock to increase muscle growth and appetite.

Irvin has the right to appeal the suspension of his license, which was applied retroactively to Dec. 3, 2010.