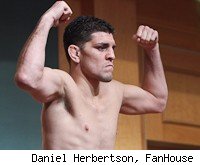 Strikeforce welterweight champion Nick Diaz and lightweight titleholder Gilbert Melendez will put their titles on the line against Paul Daley and Tatsuya Kawajiri, respectively, on the April 9 Strikeforce card in San Diego, Calif.

Strikeforce announced the bouts Wednesday alongside the postponement of the heavyweight tournament from April 9 to June 18.

This past January Diaz (24-7) successfully defended his Strikeforce belt for the second time when he submitted Evangelista "Cyborg" Santos with a second-round armbar. Daley (27-9) made his Strikeforce debut last December with a brutal first-round knockout over Scott Smith. Daley returned to action over the weekend and added another KO to his record, finishing DEEP champion Yuya Shirai in the first round at BAMMA 5 in Manchester, England.

Melendez (18-2) last competed in April 2010 when he pitched a five-round shutout against DREAM champion Shinya Aoki on the Strikeforce-CBS card in Nashville. Melendez was supposed to give Aoki a rematch next in Japan on New Year's Eve but the fight fell apart due to contractual issues. Kawajiri (27-6), who lost to Melendez at PRIDE Shockwave on New Year's Eve 2006, is coming off a decision win against Josh Thomson at Dynamite!! 2010.