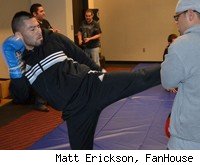 In the pantheon of MMA fights begging to get a reboot, Brian Bowles vs. Damacio Page likely was not at the top of many lists. But Thursday, at UFC on Versus 3, the two bantamweights will get back together to rehash a bout they had 31 months ago, a fight won by Bowles with a relatively trouble-free first-round submission.

But with Bowles coming back after a year-long layoff, and Page having a long layoff of his own recently, Page said the rematch makes perfect sense.


"I wasn't surprised at all (when they offered it to me)," Page said Tuesday after a workout in Louisville. "It was in the mix – it was a long time waiting. He came off a loss, I came off a loss. And what better way than to throw us back together? It's going to be a good fight – I'm very excited."

Page returned after 13 months on the shelf and ran into Demetrious Johnson at WEC 52 in November. A third-round guillotine had him tapping – the same way Bowles had beat him three fights prior. Cage rust or not, Page said it doesn't matter.

"I'm not making excuses – he beat me," Page said. "I fatigued in the later rounds – so there's a possibility (cage rust played a factor). I was out for a whole year and I wasn't able to train for eight months. Coming back, the body's not used to it. But I'm not taking anything away from Demetrious Johnson – he beat me and that's all there is to it. People can say what they want to say – ring rust, no ring rust. I think I was just ill-prepared."

But in the four months since that loss, Page believes he has made strides already to improve his skill set – and he said it goes beyond just the physical attributes he brings in.

Put simply, "The Angel of Death" might now be putting some thought into how he fights, even though he still loves the "rock 'em, sock 'em robots" style of fight.

"I'm in better shape, I'm stronger, I'm faster," Page said. "I've been working on my striking. My overall game is a lot better than it was the last fight. My previous fights, I was going out there to kill and just destroy people and not putting any gameplan together. Now I've got a gameplan and I'm out there to fully commit to it and do good."

Bowles returns after a year off – his last fight cost him his bantamweight title in his first defense of the belt when he broke his hand against Dominick Cruz. The fight was halted after two rounds, Bowles lost his strap and found a new home on the couch waiting for his hand to heal. (A foot injury later in the year further set him back, as well.)

Page knows what layoffs like that are like, but he said that gives him no advantage against Bowles. His advantage, he believes, is the thought of seeing Bowles' hand raised for the second time against him.

"I don't like to lose, and I don't like to lose to someone twice," Page said. "I've never lost to someone twice and I don't plan on doing it. Both of us have great power for our weight class. I think it's just whoever has a better chin at the end of the night is going to win the fight. I think both of us have the capability to knock anybody out, (but) I think I have an awesome chin."