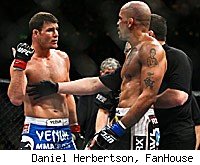 When you think about it, it's almost comical that in a job that rewards him for bludgeoning other humans with his appendages, it would be something as childish as spitting that lands Michael Bisping in hot water.

Break a man's jaw? Here's your bonus check. Get a little too careless with your saliva? Now we've got a problem.

But even though Bisping threw what was an illegal and, depending on your perspective, possibly intentional blow in his bout with Jorge Rivera at UFC 127 in Sydney, it's his decision to spit in the general direction of Rivera's cornermen that seems to have provoked the ire of both the UFC and MMA fans.

According to what UFC president Dana White told our own Mike Chiappetta recently, Bisping will be punished. The question of what he's being punished for, and what form that punishment will eventually take, that's a bit murkier at the moment.

For starters, there's the knee. Bisping will tell you it was mistimed, while Rivera will say it was the most deliberate foul since the dawn of Hack-a-Shaq in the NBA.

Bisping will obviously never admit to seizing an opportunity to illegally scramble his opponent's cognitive abilities, but it sure didn't look like most accidental knees we've seen in MMA. It also didn't appear as though Bisping was feeling all that contrite as he taunted Rivera's corner and posed for the crowd even as doctors were pressing Rivera for a decision about whether he could continue.

Of course, Bisping was already punished for that foul. He stood there in the center of the cage while the referee gingerly held on to his wrist and called for one point to be deducted from him on the judges' scorecards. So case closed on that one, right?

Maybe. Even if, as Cage Potato's Chad Dundas pointed out, it's another instance where cheating seems to overwhelmingly favor the cheater in MMA competition, there's no way of knowing whether he did it on purpose. Taking a point away from a guy who has just concussed an opponent (who will then be pressured, either implicitly or explicitly, into continuing anyway), isn't really enough, but hey, we ask the ref to enforce the rules we have rather than the rules we want. If the UFC steps in and makes itself the final arbiter of whether fouls were intentional or accidental, that opens up a whole new can of worms, and White knows it.

But then there's the spitting, which, let's be honest, doesn't do anything to help Bisping's image as an upstanding fighter who would never do something like intentionally foul an opponent.


Bisping claims that he didn't spit at Rivera's cornermen, but rather on the floor in front of striking coach Matt Phinney "to let him know what I thought of him." Of course, if you go back and look at the video that Rivera's team was more than happy to put together, that spit certainly seems to have an intended destination outside the cage.

Since the UFC has decided to punish Bisping, we can assume that not too many people in the Zuffa offices are buying the whole 'I wasn't spitting at you; I was spitting near you' argument. So now what?

The first idea to jump into many people's minds is a suspension. It's a sort of staple of pro sports crime and punishment, and in season-oriented sports like baseball or football, it serves its purpose well. Your team misses out on your services, you miss out on a chance to contribute to your stats and salary, and everybody comes away feeling like a lesson has been learned.

But in pro fighting, where competitors routinely take three or four months off between bouts, a suspension has to be pretty lengthy to make a dent. Bisping's spitting incident isn't exactly sporting, but does it really merit a six-month or year suspension – penalties normally reserved for steroid cheats?

It's a bizarre calculus that equates sticking a needle in your veins in an attempt to unfairly increase your ability to hurt someone with letting some saliva fly in the heat of the moment. Not only is it too harsh a punishment for the latter, it makes the punishment for the former seem ineffectual by comparison.

There are also those who would see Bisping fired from the UFC altogether for his sins. That's a bit of an overreaction, and as long as the UFC continues to employ men who have committed actual crimes while on the roster, it's inconsistent with past precedents. Spitting, while unsanitary and just plain dumb, doesn't actually hurt anyone.

That leaves us with only one viable option: the fine.

When Terrell Owens spit at DeAngelo Hall, the NFL fined him $35,000. To Owens that might be nothing more than a nice brunch and an afternoon of shoe shopping, but to a UFC fighter that kind of financial loss would sting. It would also get other fighters' attention, effectively sending the message that the UFC giveth and the UFC taketh away.

Say Bisping lost his win bonus as a result of his actions at UFC 127. Say he even just lost an arbitrary amount of money that was less than that, but still substantial for a man who has to sweat and bleed for his cash. You think that would be enough to make him feel like maybe he wants to keep his spit to himself from now on? The UFC could even do something positive with the money, like add it to the disaster relief funds for Australia or New Zealand, or add it to the pile of money that it contributes to wounded soldiers and traumatic brain injury research.

The point is, the UFC has to do something in order to show that it does not hold its athletes to a lower standard than other pro sports. A suspension or a release would be either impractical or excessively harsh, but money is the UFC's favorite way of positively reinforcing good behavior, such as exciting performances or bonus-worthy finishes, so why not make it work the other way as well?

If nothing else, at least Bisping will learn that while talk is cheap -- especially on YouTube -- spit is not. Not on live TV, anyway, and not in the UFC.