Michael Bisping's Team Calls Jorge Rivera's the Most Unprofessional Ever 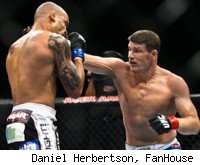 Three days after their fight in the Octagon came to an end, the war of words between Michael Bisping and Jorge Rivera, and the respective trainers and managers of both fighters, is still not over.

Bisping and his team at the Wolfslair MMA Academy released a blistering statement about Rivera on Tuesday, ripping Rivera and his "notorious corner man, Matt Phinney" for their conduct before, during and after their fights at UFC 127.

"Let me begin first by saying that in five years of competing in the UFC at every level, we have never encountered a more unprofessional outfit as Jorge Rivera's camp," Anthony McGann of Wolfslair MMA Academy in the statement.

According to Wolfslair, Bisping was OK with the insulting videos that Rivera and his camp made in the run-up to the fight, saying he understood those as just an attempt to hype the event. But Bisping thought Rivera and Phinney crossed the line with actions and comments during fight week.

"The real problems begin in the hotel in Australia. As always fighters are staying in close proximity in the hotel for over a week and during the day the camps pass each other," Bisping says in the statement. "Normally the fighters will be tense with their opponent but the teams always remain neutral and polite. Rivera's crew were mocking mike and laughing at him and Jorge even gave an interview to Fanhouse saying if Mike was a man he would confront him in the hotel. This situation was the reason for the emotional weigh-ins and throughout the catalyst was Phinney. In fact Rivera had two more coaches who never participated in any of this, they did act professional. It was always Rivera and Phinney."

"Mike apologised in the press conference for losing his cool, he apologised on the post fight with Joe Rogan, the joke is after all the efforts the Rivera's camp made to create this situation it was them who complained afterwards not us," Wolfslair said. "We have more respect for the UFC and did not want to make an issue of their behaviour."