From 'Humbled Back Down to Zero,' Diego Sanchez Continues Rebuilding 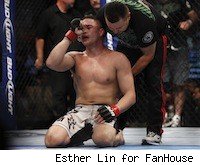 Give Diego Sanchez the chance to talk about where he's been and where he's going, and if he's in the mood, he'll rip open a vein and bleed out nearly every detail he can remember, whether thrilling or depressing. The 29-year-old has been a UFC regular for nearly six years, and he's experienced both the highs and lows of athletic competition during his run in the organization, from winning season one of The Ultimate Fighter and later becoming the lightweight No. 1 contender, to getting stopped for the first time in his career.

He's equally open about his life outside of the cage, including partying too much, being scammed out of nearly $200,000 and making bad decisions that affected his career.

Sanchez, however, is ready to close the door on his past mistakes while embracing his past successes. Most notably, after a 3-year-plus absence, he returned to the trainer that helped build him: Greg Jackson.

On Thursday, Sanchez faces Martin Kampmann in the main event of UFC on Versus 3 with the belief that his ship is righted.

"My motto is, 'Just earn it,'" he said in a recent teleconference. "After I had those two losses, I changed everything. I'm just back to hard work, and I want to go into every fight with a mindset that, 'You know what, I already earned this 'W,' and it's mine.' I'm going to take it and it doesn't matter ... It doesn't matter what my opponent has done. I know that I've done everything possible in my ability to get the 'W' and that's where I stand right now. I'm very confident going into this fight."

That confidence has been quite literally elevated by his move back to the mountains of Albuquerque, New Mexico, the home base of Jackson's camp. It is the city where Sanchez grew up, and the camp where he grew up as a fighter. He started with Jackson when he was just 19, and the gym was yet to boast an MMA fight team.

Sanchez became one of the first Greg Jackson fighters to hit the bigtime when he won season 1 of TUF. He seemed on his way to a possible championship after winning the first 17 fights of his career, but suffered his first setback in a decision loss to Josh Koscheck. It was then he split with Greg Jackson, after Jackson decided to work with Georges St. Pierre, a fellow welterweight.

After splitting with Jackson, Sanchez went 4-3, but did manage to make a run at the lightweight title before being stopped by BJ Penn. That loss, he says, put him in a funk he had a hard time escaping.

"I hit rock bottom after the BJ Penn fight, I really did," he said. "I blew through all my money, I really just made some very bad decisions. I had this scam artist scam me real bad. I was embezzled over $175,000. I really hit rock bottom and I had to come back home. I needed my family love and I just was humbled 100 percent. I was humbled back down to zero."

Sanchez says now that his focus was nowhere close to where it should have been for his follow-up fight with John Hathaway, admitting that he would often go to the bar and drink after training.

"I didn't even take him seriously at all," he said. "I thought, 'I'm going to go in there and I'm going to knock this guy out. I'm going to take him down.' And, you know, first round I got hit with the knee in the face real hard and I couldn't recover from it. I wasn't in the physical shape or the spiritual or the mental. I shouldn't have been in the ring for that fight, period."

The loss served as a wake-up call for Sanchez spiritually (he says it caused him to reconnect with his faith) and career-wise (he moved back to Jackson). Sanchez says that walking in to the gym for the first time in years just felt right.

"This is something that was just - it was my life, and to be back home and Greg Jackson, that guy got so much love for me," he said. "He just had his arms open, all the doors open and said, 'This is your gym, Diego.' So it was a great feeling. And every day that I walk in there, I get that same feeling and I just thank the Lord that he's brought me back home and that I finally let my stubbornness go and said, 'This is where I need to be.'"

But when Jackson took an objective look at Sanchez in the gym, he was surprised at what he found. Sanchez had abandoned his previous identity, the one that had made him a successful, relentless fighter in favor of one that made him a generic kickboxer.

"He's like, 'You're a relentless ground and pound guy with unlimited endurance,'" Sanchez said of the encounter. "He told me, 'That's the type of fighter you are. You've got to fight a predator's style. You've got to chase your opponent down and stalk him and be a predator.' And we worked hard. Greg, he totally helped reinvent me."

In his first fight back under the Jackson banner, Sanchez outworked the tough Brazilian Paulo Thiago for a decision win. Now against the versatile Dane Kampmann, Sanchez has a chance to beat back-to-back quality opponents. Kampmann in his last fight nearly upset current No. 1 welterweight contender Jake Shields, losing a split decision.

"I have a lot of respect for Martin," he said. "I know he's a hard worker also. And any UFC fighter coming off a loss is going to be very motivated and going to have a lot of drive and determination and so we're going to get in the cage and we're going to see who wins, you know what I mean? But, I know I did what I need to, to know in my heart that the 'W' is mine."

As for future goals and possibilities, Sanchez says he'll take them as they come. Many Team Greg Jackson fighters say they wouldn't face each other. Sanchez won't close the door on a possible title fight with current champ Georges St. Pierre, while fellow teammate Carlos Condit is another welterweight in the mix.

Sanchez says right now, it's one step forward at a time, while keeping a healthy respect for his past.

"Fighting for the world championship is my dream and will always be my dream," he said. "But I've got to just take one fight at a time now. Before, when I was 19-0, I was undefeated and I was 23, 24 years old. Yeah, I was cocky, I had a little bit of ego. I had to get humbled. And right now, I just want to earn it."