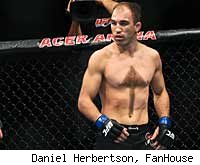 If you're one of those people who insist on connecting the dots between every bad thing in the past and every good thing in the present – if you are, in other words, annoyingly positive – then you could say that Brian Ebersole's surprising UFC debut, his upset win over Chris Lytle, and the $75,000 bonus check he received for the 'Fight of the Night' would never have happened if not for a street fight between some rowdy college kids more than a decade ago.

Ebersole, a third-year college student on a wrestling squad that features future UFC legend Matt Hughes as one of its assistant coaches, has built something of a reputation for himself as a guy who can fight a little bit when he wants to.


He's just spent the summer bouncing from one small-time Midwestern MMA event to the next, going wherever they need a warm body willing to jump in the cage for gas money and the chance to find out what he's made of. By the time school starts up again he's had four MMA bouts and the freshmen in his dorm have taken to calling him 'Champ,' both to his face and to others.

As in, 'What, you think you want to fight Champ? Are you trying to get beat up?'

You see where this is going.

One night a hockey player from some other school is on the Eastern Illinois campus visiting friends. Taking on this so-called 'Champ' starts to sound like a pretty good way to prove his manhood. Being young and mostly drunk, that doesn't hurt his courage any either. He and his friends pursue Ebersole all night in the hopes of getting their shot. Ebersole tries to play it cool, but the later it gets the less cool he has in store. Finally he ends up face-to-face with the three of them, and he's too annoyed to walk away any longer.

"Then the bigger of the three stepped in between the other two and hit me square in the eye," said Ebersole, now 30 years old and a veteran of more than seventy pro fights. "We had a bit of a wrestle after that."

That 'wrestle' included Ebersole putting his adversary in an armbar not once, but twice. The guy just wouldn't learn – not even after Ebersole had stretched his joint beyond its natural threshold – and things didn't start to wind down until Ebersole had slammed him to the ground and managed a few decent strikes from mount even while getting his own nose bloodied trying to fend off one of the others.


Soon after, he was visited in his dorm room by a police officer and led away in handcuffs. He spent two days in jail, was barred from returning to school for seven weeks, and lost his spot on the wrestling team. Nine months later, the charges were dropped.

"The other guy didn't even make a statement," said Ebersole. "He knew we were both willing participants."

By then though, the damage was done. Without wrestling Ebersole found himself mired in depression and he lost his momentum to finish his degree. His original plan had been to become a high school teacher, but that dream soon evaporated. He ended up taking a $20,000 per year job on a hog farm instead – the only job he could find in the area, he said. It left him plenty of time to think about how one little incident can change everything.

"It was a bit of an interesting night," said Ebersole. "I lost my whole wrestling career off that. I should have walked away, but I guess it's part of the story that got me here, isn't it?"

Here, as of last weekend, is the UFC. It took him more than ten years of fighting everywhere they'd have him – sometimes six or seven times in one calendar year – but a few weeks ago an injury to welterweight up-and-comer Carlos Condit opened up a spot on the UFC 127 card in Sydney, Australia. Ebersole, who has lived in Australia since 2007, was the one who got the call.

"I signed the contract on the Friday two weeks before the fight," said Ebersole, who admitted that he wasn't quite in top shape when the offer came through. "I had to go do it. This opportunity just wasn't going to come any other way, so I had to take it."

He also, at least in his mind, had to win in order to assure that his stay in the UFC would last longer than one fight. And after all this waiting, he simply couldn't allow himself to go one-and-done in the world's biggest MMA organization.

"I never expect something to be given to me. The times I have expected something to be given to me, first of all, it sure wasn't. Second of all, it turned out to be a slap in the face to the person I expected something from. I wasn't going to slap the company in the face by being like, 'I came in and fought Chris Lytle on short notice, so even though I lost you owe me one.' That's the wrong attitude to take. I expected to have to earn anything I get."

He'd had a few nibbles from the UFC before. For instance, there was the time he was training at AKA in California and got a call asking if he'd like to fight Joe Riggs on short notice.

"But my problem in California was that I had to work as a bartender to make ends meet and pay rent," said Ebersole. "That was a bit of a problem, and when I didn't have a fight coming up I'd have a drink or two after work and hang out a little bit, so I wasn't always in top condition. Looking back on it, I should have just stayed in top shape all the time and done my thing, but you fall into a normal life routine."

If not for his ill-fated fight against Shannon Ritch in San Francisco in 2006, Ebersole might still be in California. But after wining the fight via submission, Ebersole was suspended along with Ritch when the CSAC accused them of working the fight.

"They claimed my fight with Shannon Ritch, well, to put it mildly they claimed that I carried Shannon too long and I didn't finish him early enough. That was coming from the same people who sanctioned that fight. They had to approve that fight."

While under suspension Ebersole took a fight in Australia and then stuck around for a couple months afterward. He loved the country and the climate – with plenty of beaches and sun, it wasn't so different from California – so he stayed. He spent the next few years racking up fights on the Australian scene and making a name for himself on Aussie TV as the guy who fought with an arrow shaved into his chest hair, pointing up at his chin to give his opponent a helpful hint on where to hit him.

But when the UFC tapped him to face Lytle in front of the same fans who had come to know and love him, Ebersole knew that the brass wasn't exactly expecting him to win.

"I don't think they expected me to do that well. I think they at least knew that they had a credible opponent, and they've known for a while that I was a credible athlete. They just didn't think I was incredible, so they never tried to sign me or market me or give me a deal. I think I got lucky getting this fight. I was at the right place at the right time, and I'm more than happy with what I've done. This week has been an absolute dream."

If you ask him now, he'll say he wasn't all that nervous before getting the shot he'd been waiting for against an opponent on a four-fight winning streak in the UFC. He'll also tell you that he knew as soon as he landed the big knee in the second round that he had the fight won, or that it was at least his to lose from then on.

What he didn't know, however, was whether anybody was really enjoying the fight. He certainly didn't know it would be deemed the official Fight of the Night by the UFC, which came with a check for more money that he normally would have earned in two or three years.

"I couldn't tell how exciting it was while I was in it. I knew I did some things that made people laugh, and I knew I had a good performance, but to get the Fight of the Night bonus, I guess that speaks volumes about what [the UFC] thought of it."

After that kind of debut, it's a pretty sure bet that he'll get a second fight in the UFC, probably sooner rather than later. His victory may have come as a surprise to oddsmakers and UFC executives, but it was more or less what Ebersole expected, he said. Except for the part at the end of the night where he was handed a check for $75,000.

"I haven't decided what to do with it. I'm still staring at it. I haven't even been to the bank yet. It's just kind of weird."

Then again, when you've gone from a Midwestern college wrestler to an Australian local fighting on a worldwide pay-per-view broadcast with an arrow shaved into your chest hair, what does 'weird' even mean anymore? And if weird comes with the recognition and opportunity you've spent more than ten years struggling for, and if an unexpected lump of money comes along with it, who would ever want to be normal?