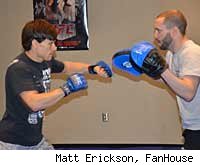 LOUISVILLE, Ky. – What sounds like a dream to dream to plenty of people – being forced out of work and onto the couch due to injuries – was driving Brian Bowles nuts.

"It was awful," Bowles said Tuesday. "Not only was I not fighting – some of the time, I wasn't training. All you've got is a lot of time to sit around and think about what you could be doing and watching (other fighters) on TV, watching them have success. And in my mind, I'm thinking I could beat those people that are having success. It's a little depressing, but (I just) had to know that I'm going to be back and I'll do well."

Bowles (8-1, 5-1 WEC), the former WEC bantamweight champion, finally gets back to work Thursday at UFC on Versus 3 in a rematch against Damacio Page – his first fight since losing his 135-pound title to Dominick Cruz at WEC 47 a year ago.

In that fight, Bowles broke his hand and wasn't able to continue past the second round, giving Cruz the TKO win and the belt he's had since then. It was Bowles' first career loss, and it came in his first defense of the title, which he had taken from previous division stalwart Miguel Torres at WEC 42.

But with his hand – as well as a foot injury and a lingering rib injury – healed and ready to go, Bowles said he's glad the wait is over. Debuting in the UFC is a nice added bonus. But Bowles said the key for him right now is to get back in the win column – and avoid going back on the disabled list.

"I've been sitting on the couch for the past year," Bowles said. "I'm excited to get back in the cage – especially in the UFC. It's something I've been waiting on to happen. I really feel like I just need a win and to stay healthy. Domination, if it happens, will be icing on the cake. But right now I'm just focused on staying healthy and the win."

A win would appear to be crucial for Bowles in a bantamweight division that has seen its landscape get an overhaul since he last saw action. Torres long ruled the roost before Bowles beat him, and Bowles was thought to be the Next Big Thing in the division until Cruz announced his presence.

Now the class features a dominant Cruz; the return of Torres with a pair of wins following the first two-fight skid of his life; former champ Eddie Wineland, riding a four-fight winning streak; former title challenger Joseph Benavidez; and Urijah Faber, the former featherweight kingpin who dropped down to 135 in November.

Bowles, just one fight removed from holding the title, thinks he might even be the forgotten man. And he realizes there's a whole legion of casual UFC fans who may not have ever heard his name since he was in the WEC before going on the shelf.

"The division's gotten tougher," Bowles said. "It kind of evolved while I was out. A lot of people surpassed me – their careers just kept going on, and mine was just on hold. And I think it just got tougher. And I think now that (bantamweight) is in the UFC, people are going to start dropping down. It's just getting better and better."

To get back on track, Bowles was given Page – perhaps an odd matchup given Bowles went through him relatively easily their first time around, a first-round guillotine submission win at WEC 35. But when you're out a year, you take what they give you.

"I'm not really one to ask for opponents, or say no," Bowles said. "That's not how it works. They just call you and say this is who you're going to fight. I thought it was a little strange, and then I started thinking about it – we had both been out for a little while and we're both Top 10 in the world fighters. He had a bad last performance, so did I. So I think it kind of makes sense to match us up."

And though he admits a win would get him back in the title mix, he thinks he needs a few more fights to get back into true contention – especially when there are so many people seemingly ahead of him in line.

But he could change all that by reminding people how he started his career 8-0 in the first place.

"Peoples' careers have evolved," Bowles said. "They're more relevant than me – some of them have fought two or three times since I've been out. People kind of forgot about me. I just have to go out there and get a win and remind them that I'm here and that I perform well."