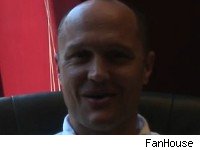 Just two years into the company's existence, Bellator continues its forward momentum by premiering on MTV2 on Saturday night. Once seemingly another in a long line of flash-in-the-pan promotions, the organization has become a player in the MMA world with a mix of exciting prospects (Patricio "Pitbull" Freire, Rick Hawn) rising stars (Ben Askren, Zach Makovsky), and established champions (Hector Lombard, Eddie Alvarez).

During its recent offseason, Bellator even showed a willingness to dip into the major free agent pool, inking highly regarded featherweight Marlon Sandro.

But with more exposure comes added expectation, and thus comes the challenge for Bellator to produce a product that matches the entertainment value of major US promotions Strikeforce and the UFC.

It's a challenge that company CEO Bjorn Rebney embraces.

Rebney has been a student of the MMA game for years now, examining promotions that failed and the few that have succeeded. That, he says, allowed him to build a plan that would accelerate the company's growth, a fact crucial to Bellator's continued existence.

"I was very cognizant of hitting those numbers and getting to that next jump-off point quickly, because there aren't a whole lot of businesses right now where you can go two or three years deficit financing, always looking for capital and never making money," Rebney said in an interview with MMA Fighting.

"When I went out and got the investment capital to do this, I projected when we'd hit cash-flow break even, when we'd have the big TV deal for multi-years and that alliance, and this is on that schedule," he continued. "I don't know if it's a matter of it hit when I expected it, or it hit when it had to, but one way or another, the square peg went into the square hole in terms of the dynamics of our business."

A three-year broadcast deal in hand, Rebney can now spend more time focusing on the actual product, something that has already drawn raves from many fans for exciting fights.

In year one of Bellator, there was no U.S. television deal, with English-language fights only available online. In year two, Fox Sports Net aired fights nationwide, but start times were unpredictable, often delayed and pre-empted in major markets.

In crafting a deal with MTV2, though, Rebney built in a clause that guarantees nationwide, Saturday night primetime live broadcasts each week, with start times flexible based upon what's going on in the rest of the MMA world. So on a night Bellator is the only national event, it will air at 9 p.m. ET. But if the UFC has a show on the same night, it will move up to as early as 7 p.m. ET.

"It's been the consummate partnership from a creative perspective," Rebney said. "We produce the show, we sign the fighters, we're the organization making it happen, but they've been awesome from a creative perspective, with marketing, P.R., etc. They're highly involved, and their involvement is a very good thing. They have an amazing amount of experience under that umbrella in the MMA space, reaching this demo, programming to this age group. They've been spectacular. I've worked in television as it relates to fighting sports for almost 20 years now and I've never worked with a group as fluid and cooperative than these guys."

The improved caliber of fighters has been a trend for Bellator, but there's still no question that Rebney's most highly regarded star is lightweight champion Eddie Alvarez. Recently, Alvarez and Rebney made some noise when they offered to set up a fight with Strikeforce champion Gilbert Melendez. For his part, Melendez said he was interested as well, but that's as far as it went. Rebney said that he never got a return call from Strikeforce CEO Scott Coker.

But Rebney also takes some of the blame for not making the fight happen.

"I probably took my CEO hat off and handled it too much like a fan," he said. "I probably could have stepped back a little bit. I was so enthusiastic about it. Eddie wanted the fight, Gilbert wanted it, and I wanted it. At the time, I had total flexibility. Anywhere, anytime it didn't matter. It was so exciting for me to think as a fan that we could get these top guys to match up. But Scott didn't want the fight. If I were him, I wouldn't want the fight, either. He never responded and it never got off the ground, but it's still a fight I'd love to see. Eddie has his hands full with Pat Curran. Pat has the uncanny ability to shock people, but I'd still love to make that fight. I think Eddie Alvarez beats any lightweight in the world right now."

Rebney said that with their new platform of MTV2, he may revisit the possibility in the future.

But for now, it's full steam ahead with the launch of season four. The little promotion that started out in Spanish language only TV broadcasts is suddenly a primetime Saturday night, nationwide organization.

"It's exciting," he said. "We've had enough time to step back, plan and orchestrate it the way we want to. I think we have a compelling dynamic for fighters. You sign with Bellator, you're going to be on Saturday night on primetime reaching nearly every home in this country. This is what we've been looking for: same place, same channel every single week. We had the time to put it into motion. It's not perfect but it's getting closer to what I had in my head a few years ago."