Michael Bisping to Be Disciplined for UFC 127 Spitting Incident 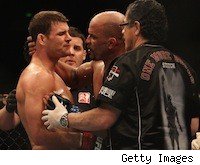 Shortly after finishing his second-round TKO over Jorge Rivera, Bisping walked over to the octagon corner closest to Rivera's team and spit in their direction. The incident was caught on camera, though Rivera's cornermen could not be seen from the angle shown.

Rivera's boxing coach Matt Phinney was hit, according to a statement from their camp. Bisping denied spitting at them, saying, "I was spitting on the floor to let him know what I thought of him."

White said he has yet to make a decision on whether Bisping will be fined and/or suspended for his actions, but confirmed that he will be subject to some punishment.

Despite insisting he had not spit directly at Rivera's corner, Bisping (21-3) apologized for his behavior in post-fight interviews, saying he momentarily lost control because of the pre-fight videos made by Rivera which mocked him. In the videos, Bisping was portrayed by Phinney. But when told Rivera's camp was demanding a punishment for his actions, he took umbrage.