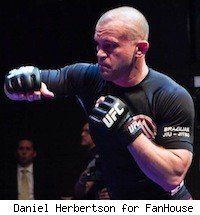 Because he's a pro's pro, Chris Lytle wouldn't admit it, but he was far from fighting at full strength in his UFC 127 loss to Brian Ebersole. In fact, just four weeks before his fight, he had the injured meniscus in his right knee removed, MMA Fighting has learned.

Lytle chose to keep the procedure quiet to deflect attention and avoid devaluing Ebersole's win. But after MMA Fighting learned of the injury from two separate sources, Lytle's manager Ken Pavia finally confirmed the surgery, which he said began as an exploratory procedure before the doctor removed the meniscus due to the damage.

Lytle chose to fight, and the ensuing unanimous decision loss to Ebersole marked the end of a four-fight win streak. It could also possibly bring a close to his career.

"He's considering his options, and retirement is one of them," said Pavia, who added that Lytle is likely to take some time before making any decision.

Should he call it quits, the 36-year-old Lytle (30-18-5) retires with a reputation as a crowd-pleaser who tied for the UFC record for most nightly bonuses, eight, a record he shares with UFC middleweight champion Anderson Silva.

With 19 fights on his UFC record, he is sixth all time for most bouts in the promotion. Though he started his UFC career with losses in six of his first eight fights, he went 7-4 over his final 11 bouts, including a win over former UFC champion Matt Serra.

True to his reputation, Lytle captured another $75,000 Fight of the Night Award for his scrap with Ebersole. Pavia said that while Lytle was unable to run in the weeks leading up to the fight, he never thought about withdrawing.

"He'll never use that stuff as an excuse, and the reason he tried to keep this quiet is because he wants to make sure that Ebersole gets all the credit in the world for his win, and for livening up the fight," he said.