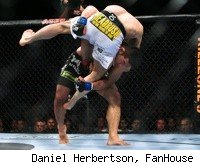 This is the UFC 127 live blog for Nick Ring vs. Riki Fukuda, a middleweight bout on tonight's Spike TV portion of the card from the Acer Arena in Sydney, Australia.

Ring (10-0) was a member of the TUF 11 cast but couldn't compete due to a knee injury. He's making his UFC debut. Fukuda (17-4) out of Japan is coming to the UFC after holding the DEEP middleweight championship.

Round 1: Ring opens with leg kicks, but Fukuda surprises him with an early takedown. Ring threatened with an arm bar, then a triangle. Ring's active guard put Fukuda on the defensive, and Fukuda pulled out. Fukuda scored with a straight left and Ring answered with a knee to the body. Fukuda tried another takedown but Ring stuffed him. Fukuda scored a takedown with about 15 seconds left. A very close round that could go either way. MMA Fighting scores it 10-10.

Round 2: Early back and forth in the standup. Fukuda goes for another takedown, but no dice. A few seconds later, Fukuda takes him down. Ring gets back to his feet within moments. Ring scored with a knee to the body. Ring paws a jab from the outside. Fukuda shoots again but Ring stops him. Fukuda lands a pair of knees to the body. As the round nears an end, the action picks up a bit, with Fukuda landing more knees to the body. Ring fires back an uppercut, but this round is Fukuda's, 10-9.

Round 3: Ring is content with the pace of this fight but isn't really letting his hands go. Fukuda ducks under a jab for another takedown one minute in. Ring continues working underneath him and gets back to his feet with minimal damage. Ring gets taken down again moments later. Fukuda had Ring's head against the cage and for the first time, did a good job of holding him down. Fukuda looked for an arm triangle but never got close. Ring hunted a kimura but couldn't come close, and the ref stood them up with :20 left. Ring had to know he was behind but didn't throw a strike in the final seconds. Round to Fukuda, 10-9.