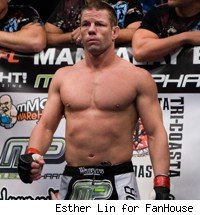 Davis, 37, had been fighting exclusively for the UFC since October 2006, but was released last month after a knockout loss to Jeremy Stephens at UFC 125.

Davis entered the UFC through The Ultimate Fighter 2 television show and lost his UFC debut to Melvin Guillard during the finale card in November 2005. He then returned to local East Coast cards and compiled five straight wins in 2006 to earn a return to the UFC. Despite being a fan favorite, Davis (17-8) was released for having lost four of his last five fights.

Following Davis' release, his manager Joe Cavallaro told MMAFighting.com that Davis' intent is to eventually work his way back to the UFC.

"I spoke to Marcus and he'd dedicated," Cavallaro told Mike Chiappetta. "He felt good in the fight. He retained his power. It's one thing if he looked like s---, we might be having a different conversation. But this is what he does, and he can't wait to get back in there again."

The next MFC card is MFC 29 on April 8 at the Colosseum at Caesars Windsor in Ontario.