UFC on Versus 3 to Be Broadcast in 3D 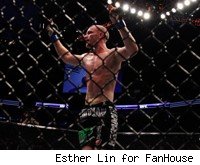 The growing trend of 3D television is finally ready to marry itself to the growing sport of mixed martial arts.

The UFC's upcoming UFC on Versus 3 event will be broadcast in 3D on select cable outlets, sport trade journal Sports Business Daily reported on Friday. It will mark the first time a UFC event is telecast in the format, though the UFC has privately tried out the technology in the past.

According to the report, the 3D telecast will have a different production crew from Versus' regular HD setup. Versus is also planning to occasionally utilize a split-screen presentation that will air live arena content like locker room views alongside commercials.

The report notes that among cable distributors, Comcast, Cox, Verizon, Massillon Cable, Blue Ridge and Armstrong have signed on.

UFC on Versus 3 takes place on March 3 from the KFC Yum! Center in Louisville, Kentucky and features a main event pitting Diego Sanchez against Martin Kampmann, alongside a co-main event pairing of former All-American collegiate wrestlers CB Dollaway and Mark Munoz.