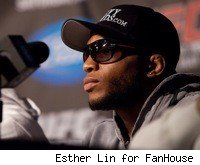 Paul Daley missed weight on Friday for his welterweight fight on Saturday. And this is not a rerun.

Daley, the former UFC fighter who's expected to contend for the Strikeforce welterweight title this spring, has a bout scheduled on Saturday against DEEP welterweight champion Yuya Shirai in Manchester, England, with the British Association of Mixed Martial Arts welterweight title on the line. But Daley came in at 172 pounds, two pounds over the 170-pound welterweight limit, at Friday's weigh-in.

Given another chance, Daley came in at a final weight of 170.4, which is still over the limit for a welterweight title fight. As a result, the bout is now a non-title affair.

Daley is always quick to offer excuses for why he missed weight, and why next time will be different, and this time the excuse is apparently something about not having access to a sauna. But the excuses are wearing thin. It's inexcusable that Daley doesn't respect his opponents or the sport enough to make weight.

Unfortunately, BAMMA isn't likely to do anything to Daley (or to Ricco Rodriguez, who also missed weight for his fight with James McSweeney) other than dock him 10 percent of his purse, which Daley clearly doesn't care about.

The biggest question now is what Strikeforce will do about Daley. If he beats Shirai he's expected to fight Diaz on April 9 in what would be a main event on a major Showtime card. But it would be a black eye for Strikeforce to have Daley miss weight in a welterweight title fight. Strikeforce may want to reconsider booking Daley for its title, until he can show that he's capable of getting down to 170 pounds.