Manny Gamburyan Pulls Out of UFC 128 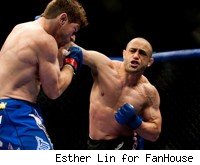 SYDNEY -- Manny Gamburyan has been forced to pull out of his UFC 128 fight against Raphael Assuncao due to a back injury, the organization confirmed with MMA Fighting on Friday.

The UFC is hoping to find a replacement for Gamburyan, but no one has been signed just yet.

Gamburyan (11-5) hasn't competed since losing a WEC featherweight title fight to Jose Aldo in September. This fight would have marked his first in the UFC since January 2009.

Assuncao (15-3) won a unanimous decision over LC Davis in November. He has yet to compete in the UFC.

UFC 128, headlined by Mauricio "Shogun" Rua vs. Jon Jones, airs live on pay-per-view on March 19. The Gamburyan-Assuncao bout was scheduled for the non-televised portion of the card.