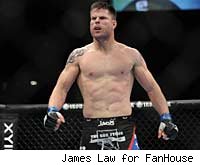 After a few intense weeks of speculation, Jorge Santiago is officially into the UFC and signed up for a match with Brian Stann, the UFC has confirmed.

The matchup between the pair will take place at UFC 130 on May 28.

Stann had been originally expected to face Wanderlei Silva until Silva informed the promotion he wouldn't be ready by the May date. That left the door open for Santiago, who was the reigning Sengoku middleweight champion when he asked for and received his release to pursue opportunities in the U.S.

Santiago (23-8) has won 11 of his last 12 fights, most recently defeating Kazuo Misaki by fifth-round TKO in an epic scrap that many considered one of the best bouts of 2010.

He trains at American Top Team in Florida.

Meanwhile, Stann proved himself to be a player in the UFC's middleweight division after dropping down from light-heavyweight. He debuted in the weight class with a submission win over Mike Massenzio in April 2010, and then opened more eyes with a Jan. 2011 first-round TKO win over iron-chinned Chris Leben.

UFC 130 is headlined by a lightweight championship match with challenger Gray Maynard taking on titleholder Frankie Edgar in a rematch of their New Year's Day draw. Quinton "Rampage" Jackson vs. Matt Hamill will serve as the co-main event.