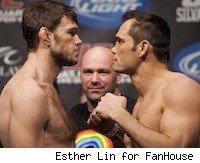 This one's gonna leave a mark.

Prior to their UFC 126 co-main event fight, Rich Franklin and opponent Forrest Griffin joked about the loser getting tattooed. At least it seemed like a joke.

But don't ever say Rich Franklin isn't a man of his word. True to his promise, Franklin -- who lost the fight via unanimous decision -- visited a tattoo shop on Friday to begin the process of getting inked.

"I don't believe it," Griffin told MMA Fighting. "We didn't even shake hands on it. I definitely would not be getting it if I lost. I'd be like, 'Yeah, yeah, of course,' but then if I lost, you would have to knock me out to get me in that chair."

In a UFC-produced video that was released before the fight, Griffin said the loser should have to get "a big, flaming dragon tattoo, or something just hideous."

Franklin's manager JT Stewart told MMA Fighting that Franklin did indeed get a dragon on his back.

"I tried to talk him into getting Forrest on his ankle. He said no," Stewart told MMA Fighting.


Neither Franklin nor Griffin had ever previously had any tattoos before making the bet.

"Once Randy [Couture] got a tattoo, I wanted Stephan [Bonnar] to get one next," Griffin said. "I'm trying to be the last boring guy left with no tattoos by getting everybody else to get one.

"If he really gets it, I'll pay for his tattoo removal," Griffin continued. "I did get the win [bonus] money. I got a couple extra bucks so I guess I can take care of it if he wants to get rid of it."

Griffin said had he been forced to follow through with the bet and lost the fight, he probably would have gotten an ace of spades card with a gryphon on it. But he insisted he thought the whole thing had been a casual joke, saying he and Franklin only briefly spoke about it in person during open workouts prior to their fight.

"I have no idea how this happened," he said. "People ask me a lot of questions, and I don't always think things through. I have random thoughts floating around. I pick them and throw them out to the world. I was blown away when Randy got one, and I'm even more surprised by this."

Franklin's record dropped to 28-6 with 1 no contest with the defeat, but while the memory of the loss fades, the ink will be there to remind him. In the meantime, the popular former UFC middleweight champion is in talks with film producers for future acting work while waiting for his next assignment from the UFC.