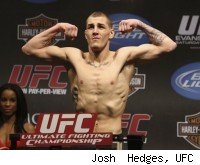 Mixed martial artist Dan Lauzon suffered a non-life threatening stab wound during a late night fight in a Bridgewater, Mass. pub parking lot, according to a published report from local paper The Enterprise.

The newspaper's website originally named the 22-year-old in its report before removing his name. A source close to Lauzon confirmed to MMA Fighting that the original report was accurate and that Lauzon needed stitches to close a cut.

His brother, UFC lightweight Joe Lauzon, wrote a blog post that indirectly addressed the situation, writing, "Luckily everything was okay and it wasn't a big deal as was originally thought."

Dan Lauzon (14-4) has fought three times in the UFC in two different runs with the promotion, losing all three bouts. Since parting ways with the UFC following a UFC 114 loss to Efrain Escudero, he has won two straight fights.

According to the Enterprise report, he was stabbed with a knife at the top of his shoulder during a fight "with a group of men." No further details were released.

Unfortunately for Joe Lauzon, while leaving from his house to rush to his brother's aid, he rolled his ankle, spraining it badly in the process. The injury will force him to the sidelines for at least a week and caused him to miss a planned military goodwill trip to Iraq.