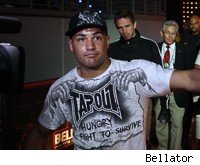 Pat Curran will finally get his shot at Bellator lightweight champion Eddie Alvarez at Bellator 39 on April 2, Bellator CEO Bjorn Rebney confirmed with MMA Fighting on Wednesday. Rebney said that no venue has been finalized for the 155-pound fight, which will air live on MTV2.

Curran was supposed to fight Alvarez in October, but a shoulder injury suffered in training forced the 23-year-old to pull out of the fight. Instead, Alvarez fought Roger Huerta in a non-title fight and defeated him via second round TKO (doctor stoppage).

Alvarez (21-2) is 5-0 in Bellator. He won the title after beating Imada in the finals of Bellator's first lightweight tournament in 2009. He has yet to defend the title.