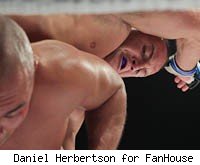 SRC middleweight champion Jorge Santiago was the first to go and Tuesday, MMA Fighting has confirmed that heavyweight prospect Dave "Pee-Wee" Herman (20-2) has left the promotion and has already signed with the UFC.

Herman signed with top Japanese manager Shu Hirata following his one-sided victory over Yoshihiro "KISS" Nakao at Sengoku: Soul of Fight on Dec. 30. After the financially unsuccessful end-of-year event, the uncertainty of the sport in Japan grew and so Hirata sought the release of Herman. The American has now signed with the UFC.

"Immediately after (I signed Herman), we began communicating with World Victory Road about Dave's first fight in 2011 because he had one fight left in his four-fight contract," Hirata told MMA Fighting. "In the second week of January we found out that the earliest SRC would do a show is in April."

The April Sengoku Raiden Championship event will not be taking place though. SRC promoter World Victory Road released a bizarre statement earlier in the month, postponing SRC 17 due to media negativity.

With the SRC 17's postponement, no major Japanese fight promotion has an event scheduled for 2011. Santiago and Herman will not be the only foreign fighters to leave the struggling Japanese promotion. More fighters are expected to announce their departure over the coming weeks.

"That article in Kamipro magazine came out, then the another article in Gong that triggered SRC to cancel their April show, so the timing was actually perfect for Dave to be released and move on with the another promotion. None of these rumors were pointing towards the bright future of the Japanese MMA." said Hirata. "On top of this, its not like the SRC has the well-established heavyweight division (with Japanese stars) therefore, we have decided to communicate with the WVR / SRC about releasing Dave so he can sign the lucrative deals in the North America."

Although Hirata was unable to confirm it, sources close to the fighter have told MMA Fighting that Herman has since signed with the UFC. A date for his promotional debut has not been set yet.

Herman, 26-years-old, holds notable wins over Ron Waterman, Don Frye and Jim York and has won 18 of his 20 victories in the first round.