With Thiago Silva Out, Rampage Jackson Gets Matt Hamill at UFC 130 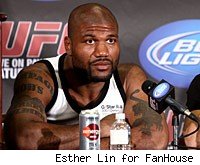 In a change of plans brought about when Thiago Silva was removed from the show, UFC 130 now has a new light heavyweight bout for its main card.

Former light heavyweight champion Quinton "Rampage" Jackson will fight Matt Hamill on the UFC's Memorial Day weekend show, which will take place at the MGM Grand Garden Arena on May 28 in Las Vegas.

The news of the signing was reported Friday by Heavy.com. Hamill's head coach, Duff Holmes, confirmed the news to MMA Fighting and said Hamill had signed the bout agreement earlier in the day.


Jackson was originally scheduled to face Silva on the card. But Silva has been removed from the show, and the speculation surrounds a second test on his urine sample from UFC 125. The Nevada State Athletic Commission has not yet released the results of that test. With the outcome in limbo, Silva is off, leaving Jackson in need of an opponent.

Stepping in will be Hamill, a contestant on Season 3 of "The Ultimate Fighter." Hamill was next scheduled to fight Phil Davis at UFC 129 in Toronto in April. Now he will get an extra month before facing Jackson.

Holmes told MMA Fighting he and his client were pleased with the new direction.

"It's the fight we wanted all along," Holmes said. "We couldn't be more excited."

Since losing to friend and fellow Ohioan Rich Franklin at UFC 88, Hamill (10-2, 9-2 UFC) is riding a five-fight winning streak, including a victory over Jon Jones – Jones' only career loss. But that win came with an asterisk attached when Jones was disqualified for illegal elbows when Hamill couldn't continue. In his last two bouts, Hamill beat Keith Jardine by majority decision, leading to Jardine's release, and beat his TUF 3 coach Tito Ortiz by unanimous decision at UFC 121 in October.

Jackson is coming off a split decision victory over fellow former 205-pound champ Lyoto Machida in the main event of UFC 123 in November. Prior to that, he lost to rival Rashad Evans at UFC 114 last May by unanimous decision.

In UFC president Dana White's eyes, the win over Machida apparently made Jackson the division's next top contender. When Evans had to pull out of his title fight with Mauricio "Shogun" Rua at UFC 128 next month, Jackson was given first crack at the belt. But he turned the fight down, saying publicly on Twitter that he would not be able to make the weigh cut in time for the fight. Instead, Jones gets Rua in the main event after his win over Ryan Bader last week at UFC 126.

UFC 130 will feature a main-event lightweight title rematch between champion Frankie Edgar and Gray Maynard. The two fought to a draw at UFC 125 on Jan. 1. Also on the card, Frank Mir and TUF 10 champion Roy Nelson meet.