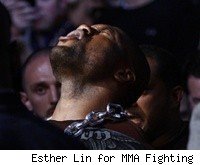 The UFC 130 fight card was scheduled to be headlined by Frankie Edgar defending his lightweight belt against Gray Maynard on May 28 at the MGM Grand Garden Arena in Las Vegas, but that has been called off.

Due to injuries to both lightweights, the light heavyweight bout between Quinton "Rampage" Jackson and Matt Hamill has been elevated to the main event.