Sergei Kharitonov Out to Earn Attention the Hard Way 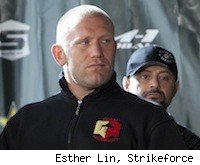 Of all the fighters in the Strikeforce Heayweight Grand Prix field, none might be more unfamiliar to American audiences than Sergei Kharitonov, a Russian airborne trooper who has fought just once in the U.S., a victory over Mike Russow in the penultimate event for the PRIDE promotion.

Kharitonov, though, boasts a long and fairly distinguished record dating back more than a decade. In fact, he has wins over tournament entrants Alistair Overeem and Fabricio Werdum on his resume. Among the eight-man field, however, he is considered a long shot to win, with the second longest odds, ahead of only Brett Rogers.

To Kharitonov (17-4), who faces Andrei Arlovski in a first-round match on Saturday, that's perfectly acceptable, even preferable.

The 30-year-old was probably the most surprising addition to the tournament field, but more due to his inactivity rather than anything else. Since knocking out Overeem in Sept. 2007, Kharitonov has fought just three times -- once apiece in 2008, 2009 and 2010. He's gone 2-1 in that span.

Though he also competed in kickboxing during the time, it seems a curious decision for a fighter who was capable of competing with the best of the world to fight so infrequently during some of his prime athletic years. Asked about his relative inactivity, Kharitonov offers little.

When pressed a bit on the issue, he only offers this: "There are some physical reasons but there are other reasons as well. Reasons I don't want to discuss."

Because of how little he's fought, it's hard to predict exactly what to expect from him. He's always been an excellent striker, and he's spent the recent past with the notable Dutch team Golden Glory, a premiere European camp.

But there other mysteries surrounding Kharitonov as well, for instance: how will he compete in a cage? Kharitonov says he hasn't competed in a cage in years, though he did spend time training in one for the tournament.

His opponent, Arlovski, is a former UFC champion, but he happens to on a three-fight losing streak. Despite that, Kharitonov hardly believes he got an easy first-round draw.

"I don't think I'm getting him at the right time necessarily because of the fact he's coming off three losses, because this is a guy who, those three losses were against some of the best in the world," he said. "And before that, he had beaten some of the best in the world. So I don't think I'm getting someone who is in any way less dangerous than he's ever been. In fact, he's probably more motivated that he's coming off of those losses."

For now, Kharitonov remains under the radar, but he knows that can and probably will change with a defeat over a high-profile fighter like Arlovski. That would be fine with him, as he plans to increase his activity and re-establish himself as a force in the division and a threat in the tournament.

Some of his prime years saw little action, but Kharitonov promises that things have changed, and a deep run in the tournament could mean he fights more over the next few months than he did in the last three years.

"I'd like to fight as often as possible whether it's MMA or boxing or sambo," he said. "I plan on fighting as soon as I can. Whether I fight in February or April, it doesn't make a difference to me. In fact, I'd rather fight every month if I can."