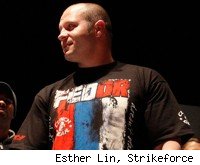 Strikeforce's much-discussed heavyweight tournament begins on Saturday night, with two of the four quarterfinal bouts taking place on a five-fight card that features nothing but heavyweights.

What: Strikeforce: Fedor vs. Silva

When: Saturday, the Showtime card starts at 10 PM ET

Fedor Emelianenko vs. Antonio Silva
Fedor is the best fighter in the history of MMA, and now he's looking to bounce back from the first legitimate loss of his career. He shouldn't have too much trouble bouncing back against Silva, who's big and strong but also slow and plodding -- the kind of opponent Fedor, with his lightning fast hands, usually makes short work of. Although I'm concerned about the possibility of Fedor breaking a hand on Silva's big head and jeopardizing the second round of the tournament, I'd be awfully surprised if Fedor were to lose this one.
Pick: Fedor

Andrei Arlovski vs. Sergei Kharitonov
Arlovski, the former UFC heavyweight champion, is on a three-fight losing streak, starting with his loss to Fedor on the last Affliction show. But even though he hasn't won a fight in more than two years, and even though Kharitonov is a threat to knock anyone out, I like Arlovski to out-box Kharitonov and win a decision.
Pick: Arlovski

Shane Del Rosario vs. Lavar Johnson
Strikeforce has taken plenty of deserved criticism for its misuse of Del Rosario, who's 10-0, has finished all 10 opponents and is one of the best young heavyweights in MMA. But while it's frustrating that Del Rosario fought just once in 2010, Strikeforce is getting his 2011 started the right way with what should be a very entertaining bout against Johnson, a heavy hitter who's not quite as refined in the stand-up as Del Rosario but who could be Del Rosario's biggest threat to date.
Pick: Del Rosario

Chad Griggs vs. Gian Villante
Griggs signed with Strikeforce last year in what was supposed to be just an easy win for Bobby Lashley. But Griggs surprised by pulling the upset. Now he gets Villante, who's built up a 7-1 record while fighting in the Ring of Combat promotion in New Jersey. It's a hard fight to call, but I'll go with Griggs, who showed against Lashley that he doesn't crumble in the face of adversity.
Pick: Griggs

Valentijn Overeem vs. Ray Sefo
Overeem is the older and less accomplished brother of Strikeforce heavyweight champion Alistair Overeem. Sefo is a former K-1 kickboxing star who says he's serious about giving mixed martial arts a go, although a guy who's about to turn 40 obviously doesn't have a long future ahead of him in MMA. If the fight ever goes to the ground Overeem will have no trouble submitting Sefo, and that's what I see happening.
Pick: Overeem