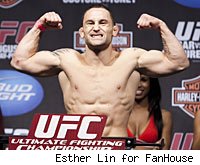 Days after Georges St-Pierre and his then-manager Shari Spencer parted ways, Spencer has said goodbye to her only other fighter client: UFC lightweight champion Frankie Edgar.

MMA Fighting confirmed with Spencer that she and Edgar had "amicably" split up. Spencer refused to give a reason for the decision and Edgar declined to comment when contacted by MMA Fighting.

While Spencer now finds herself no longer representing MMA fighters, she told MMA Fighting Tuesday evening that she is currently evaluating opportunities coming her way both within the sport and outside of it.

Edgar signed with Spencer's management group, The Spencer Firm, in 2009, prior to his title win over BJ Penn at UFC 112. At one point, Spencer represented 2 of the 5 UFC champions.

Edgar recently fought Gray Maynard to a draw at UFC 125. The fighters will tangle for a third time in May at UFC 130.

No word just yet on who will be now be representing Edgar.