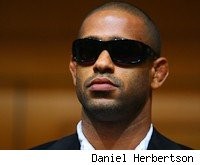 Sengoku middleweight champion Jorge Santiago has been granted his release by the organization, MMA Fighting has learned from sources close to the promotion.

Santiago's manager Malki Kawa of Authentic Sports Management wouldn't confirm or deny that Santiago is now a free agent when reached for comment, but additional sources say Santiago is looking to sign imminently with a major North American promotion.

The 23-8 fighter won the Sengoku middleweight title in January 2009, defeating Kazuo Misaki via technical submission. In August, he defeated Misaki again in a fight many consider to be the best of 2010.

The American Top Team member made his promotional debut in May 2008. He has also competed for Strikeforce and the UFC. In fact, he won a Strikeforce middleweight grand prix in 2007.

When a fan told Santiago on Twitter that they wanted to see him fight Strikeforce fighters "Jacare" Sousa, "Mayhem" Miller and Robbie Lawler, he replied, "I hope that happen too bro....Let's see it."