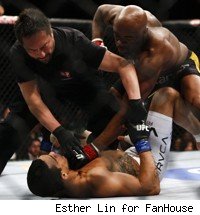 LAS VEGAS -- The incredible history of Anderson Silva adds new and dramatic chapters after seemingly every fight. He dances, he punches, he taunts, and he wins. Sometimes all at the same time.

The gifted middleweight champion extended his own UFC record win streak to 13 straight in the octagon with a highlight-reel front kick knockout victory over challenger Vitor Belfort at UFC 126.

After Silva's last fight, a near-defeat against Chael Sonnen, there was a thought among some that Silva's reign was nearing an end. Instead, his performance was reminiscent of his dominant knockouts over Forrest Griffin and James Irvin. After nearly half a round of measuring Belfort, Silva snapped his left leg forward, catching Belfort flush under the jaw. Belfort crashed backwards and looked out of it, but referee Mario Yamasaki gave Belfort a chance to recover. Silva didn't. He jumped all over Belfort, landing a right and left on the jaw that finished yet another contender.

"He faked to the body and kicked the head," said a dejected Belfort a few minutes later. "Anderson is a great fighter. I used to train with him, he was kicking my butt in the gym. I promised to put up a fight. He caught me and that's what happened."

Adding to the surreal nature of the result, Silva credited actor Steven Seagal, among others, for teaching him the kick that led to the finish. Seagal was in the crowd at the Mandalay Bay Events Center as one of Silva's guests.

The win is step one in a potential fight with UFC welterweight champion Georges St. Pierre, who faces Jake Shields in April. If St. Pierre can emerge with a win, UFC president Dana White says there is nothing in the way of the long-awaited superfight.

"It will happen this year," White said, when asked the fight's possibility if GSP wins.


The match would be for Silva's middleweight championship, as St. Pierre would move up a weight class to face him.

"I'm not actually planing on moving up or down in weight," Silva said in the post-fight press conference. "I'm planning to maintain my position in the middleweight division and prepare myself for the next combat."

If the stars align, it will be GSP, and White said the fight would likely take place at a stadium, possibly Dallas' Cowboys Stadium or Toronto's Rogers Centre.

"I love the fact that if both guys clean house, you're able to do a superfight like this between two guys who many argue are the pound-for-pound best in the world," White said.

Silva isn't the only one who potentially scored himself the biggest night of his career. While the Brazilian veteran is forced to wait and hope GSP comes through, 23-year-old whiz kid Jon Jones made his own destiny Saturday night, capturing the opportunity of a lifetime in the process.

After Jones (12-1) finished off Ryan Bader with a second-round guillotine choke, he was awarded a chance to face Mauricio "Shogun" Rua for the UFC light-heavyweight championship at UFC 128.

The plan was set in place earlier in the day when a second opinion confirmed a kneen ligament strain would keep No. 1 contender Rashad Evans on the shelf for 6-8 weeks, but Jones was not told of the possibility for fear of affecting his performance. After his win, he was given the option to fight by UFC announcer Joe Rogan and White. An elated Jones dropped to his knees in appreciation of the opportunity.

"My goal is to be the best fighter in the light-heavyweight division," Jones said later. "One of reasons I like Jose Aldo so much, he's a 23 years old and world champion. It's my time, my confidence is very high. I'm already in shape. I have six weeks to make it even better and that's what I'm excited about. It should be great."

Ironically, Evans hurt his knee in training after waiting months for Silva to recover from knee surgery. White said he couldn't promise that Evans would stay the No. 1 contender, and if Jones beats Rua, that fight might not happen anyway as the two are teammates and may refuse to fight.

Jones win over Bader was as dominant as most of his recent wins. He outlanded Bader 31-9 according to Compustrike, took Bader down once and stuffed both of the former collegiate wrestling All-American's takedowns.

Jones' opportunity was bittersweet, but he credited Evans for helping guide him through his meteoric rise.

"He took so many extra punches to the face to prepare me for Bader," he said. "People think he's arrogant, but he's an amazing person."

Rua, who happened to be in attendance among the sellout crowd, accepted Jones' the challenger.

"I think he's done pretty well in all his fights winning convincingly," Rua said through an interpreter. "He's the guy who deserves to fight most for the belt right now."

In a matchup of former champions that ended up being overshadowed in the hoopla of the evening, Forrest Griffin outpointed Rich Franklin en route to a unanimous decision win.

The bout didn't end up being the thrill-ride that some had predicted, with Griffin grinding Franklin down in the first round with ground and pound before the pair split the final two rounds.

Griffin didn't give himself high grades for his performance, but coming off a 15-month layoff, he was happy just finding his way back into the victory column.

"I just wanted to win a fight," he said. "I haven't done that in a year. Seems like a good thing to do if you want to be a professional fighter. At least win one fight a year. That's my goal. So I'm good for the year."