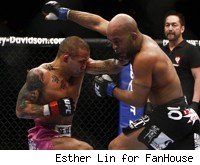 LAS VEGAS -- This is the UFC 126 live blog for all the non-televised bouts in support of tonight's UFC pay-per-view card from the Mandalay Bay Events Center.

Streaming on Facebook will be the long-awaited UFC debut of Norifumi "KID" Yamamoto, as he takes on Demetrious Johnson in a bantamweight bout. The other undercard bouts are Gabe Ruediger vs. Paul Taylor, Mike Pierce vs. Kenny Robertson and
Kyle Kingsbury vs. Ricardo Romero.

Round 1: Pierce used a front headlock to take Robertson to the mat early. Robertson got free, but Pierce ducked low to take his leg and take him down. Robertson worked back to his feet but Pierce used his bulk to hold him on the cage, occasionally delivering a knee to the legs or body. Eventually, the action slowed and ref Herb Dean re-started them. Pierce wasted no time in driving Robertson against the cage again. Pierce roughed him up a bit in close but no major damage. Still, enough for a 10-9 Pierce round.

Round 2: Pierce floored Robertson early with a left hook, followed him there and ground and pounded his way to a win.

Round 1: Kingsbury has a big cheering section in the upper deck for this one. He put on a show for them. He savaged Romero, dropping him with a left hook against the cage and finishing him with a series of rights from the top. It took all of 21 seconds, and Kingsbury jumped up and straddled the cage, pointing towards his thrilled group of fans in section 203.

Round 1: Taylor comes out with combinations looking to take advantage of his standup edge. Ruediger clinches and they break. Kelly partially lands a head kick. Already, Ruediger looks like he might have a long night if he can't get it to the ground. Rueidger clinches again, but Taylor reverses. Ruediger tries to pull guard but Taylor stays on his feet and invites Ruediger back to his. Ruediger clinches again. He tries to pull Taylor down but again is unsuccessful. After they stalemate against the cage, they're restarted. Taylor lands a combo. Ruediger catches a kick, but Taylor shows excellent balance staying on his feet as Ruediger drives him backwards. First round goes to Taylor 10-9.

Round 2: Taylor with a series of sharp scoring strikes to start the round. Ruediger has no answer in the standup. After a long clinch against the cage, Taylor breaks free and crushes Ruediger with a pair of right hooks and puts him out with a head kick.

Round 1: Kid bows to all four corners of the arena and his opponent, and we're underway. The two circle the cage gauging the distance. Yamamoto lands a left as Johnson tries a kick. Johnson scores on the back end of a combo but Yamamoto shakes it off. He answers with a straight left. Johnson tries a takedown but it's easily stopped. Johnson has a knot over his right eye from a Kid punch already. Johnson ducks under a strike and takes Yamamoto down, but the Japanese fighter's back to his feet quickly. Hard left by Kid buckles Johnson for a second. Johnson uses a body clinch for a takedown and into half-guard. Still 1:30 left. Johnson tried to take Kid's back, and Kid escaped, but Johnson hammered him with a hard left that clearly stunned Kid. They clinch against the fence. Johnson takes him down again with 30 seconds left. Strong finish for Johnson, who takes it 10-9.

Round 3: Johnson continues taking Kid down over and over. He can't do much once it gets there, but he's outwrestling a guy who wanted to wrestle in the Olympics. Yamamoto looks like he's trying to load up the left hand, but he can't get Johnson's timing as he dances in and out of range. Johnson with a punch/kick combo into a takedown against the fence. Time's running out on Yamamoto, who hasn't done much. Johnson scores one last takedown with :40 left, stays in half-guard and rides it to the closing horn for what will be a unanimous decision win.