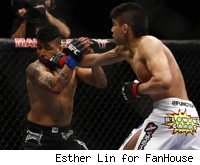 This is the UFC 126 live blog for Miguel Torres vs. Antonio Banuelos, a bantamweight bout on tonight's UFC pay-per-view card from the Mandalay Bay Events Center.

Torres (38-3) went back on the winning track last September with a submission win over Charlie Valencia. Banuelos (18-6), most known for his affiliation with Chuck Liddell, is coming off a win over Chad George at WEC 51.

Round 1: Torres and Banuelos feel each other out. Torres in orthodox stance extends his left hand, taking advantage of his reach advantage to size up Banuelos. Banuelos works punch combos to close the distance, but Torres evades well. Torres continues to throw out jabs as Banuelos continues searching for an opening to move in. The crowd is getting restless. Torres throws a leg kick that Banuelos catches and uses to take Torres down. Not wanting to climb into Torres' jiu-jitsu game, Banuelos lets Torres up. Torres lands with a straight right and is starting to be more active with his jabs to score instead of just feeling Banuelos out. Banuelos looks for the big shots, but Torres playing it safe. Crowd boos. 10-9 Torres.

Round 2: Pace is a little faster to start round two. Torres begins to mix up kicks to leg and body. Torres is playing it safe here understanding he has a significant reach advantage. Banuelos is looking to find his openings to counter Torres, but he's finding it extremely difficult. You can tell Banuelos wants to bang though. Torres is content with tagging Banuelos over and over with the jab. At the end of the round Torres allows the exchange and Banuelos lands his best shots (a left hook and overhand right) of the fight. 10-9 Torres.

Round 3: Banuelos at this point is willing to punch air to stay active. About a minute-and-a-half in, Torres begins to throw combos. Torres' head kick is blocked. Nice jab by Torres, which is the story of this fight. Torres controlling the cage in the last minute, stalking the hurt Banuelos. Torres lands a nice uppercut. Banuelos misses a back kick. They exchange but Banuelos can't get through. The bell sounds and Banuelos yells out the f-word. 10-9 Torres.

This wasn't the fight everyone was expecting, but Torres stuck to his game plan and did what he had to do to win his UFC debut.