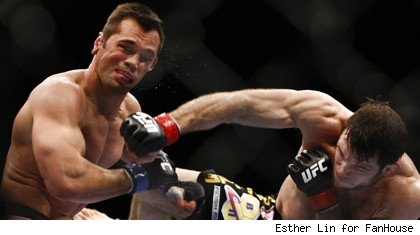 In a battle of former UFC champions, Forrest Griffin returned to the Octagon for the first time in more than a year and defeated Rich Franklin by unanimous decision at UFC 126.

It wasn't quite the barn-burner that some fans expected from Griffin and Franklin, but it was a solid fight and a good showing for Griffin, who won 29-28 on all three judges' cards.


The first round consisted almost entirely of Griffin on top of Franklin throwing punches and elbows, and Franklin, on the bottom, just trying to tie Griffin up. For the most part Franklin did a good job of tying Griffin up, but Franklin did absolutely nothing offensively, and Griffin clearly won the round.

The second round was another good one for Griffin, this one more standing up and less on the ground, but basically the same: Griffin being effective offensively, and Franklin just trying to survive. Franklin's corner told him after the round, "That last round was yours," but I had the round for Griffin.

The third round was close, but Griffin seemed to know he had it won, and Franklin still couldn't get much offense going. For Griffin, the win improves his record to 18-6 and will have him in meaningful fights in the light heavyweight division going forward. For Franklin, who falls to 28-6, the loss shows that he'll be a light heavyweight gatekeeper, but not a light heavyweight title contender.