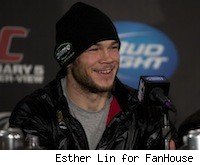 Super Bowl weekend must be a difficult time for habitual gamblers. When the big game rolls around, you can bet on everything from the opening coin toss to the final score to whether Christina Aguilera will wear a cowboy hat while singing the national anthem.

Of course, if you're actually considering betting on a pop star's accessories you should immediately check yourself into a treatment facility, but that's not the point. The point is, when you hear stuff like that it makes those of us who love to roll the dice on things we can actually evaluate with semi-intelligent analysis (two grown men fighting each other, for instance) seem pretty darn reasonable by comparison.

There's plenty to evaluate on Saturday night's fight card in Las Vegas, so how do the online oddsmakers see UFC 126 going down? Follow me below for a look at the latest betting lines.

Considering Belfort's career history, it almost feels like there should be one set of odds for the first round and another set for the rest of the fight. Belfort is 13-2 in fights that end in the first round. Even the two he lost – one to Randy Couture and one to Alistair Overeem – both came well after the five-minute mark at which a modern, unified rules bout would have halted the action for a spell. In short, he's a beast in the early going. As the rounds wear on, the beast becomes more of a puppy. When you consider Silva's penchant for starting slow and using the first minute or two to figure an opponent out, you realize that Belfort needs to throw everything he has right off the bat and hope for the best.
My pick: Silva. At these odds I'll save it for a parlay, but he's too smart and too careful to get clipped in the opening minutes, when Belfort is strongest.

It's hard to know what each man is capable of at the moment. Griffin hasn't fought since November of 2009, and Franklin was losing his last bout until a pawing punch (along with the ravages of age) put Chuck Liddell down for good. Add it all up and you have a fight that could easily go either way, which is why I'm mildly surprised to see Franklin favored that highly. With Griffin's size, strength, and willingness to keep walking forward all night, he could certainly edge out a decision over Franklin, who hasn't been much of a finisher lately, the Liddell fight notwithstanding.
My pick: Griffin. He's the best (however slight) underdog on the main card at these odds. If he stays in Franklin's face and convinces the judges of his "effective aggression and Octagon control," he'll take this.

I'm sitting here racking my brain, trying to come up with a realistic way that Bader might win this fight. It seems doubtful that he'll be able to land that big right of his, considering that Jones has the longer reach and the more impressive striking and footwork. Taking Jones down and holding him there for three rounds could work, at least theoretically, but then again there's probably a reason we have yet to see Jones planted on his back in the Octagon. Bader has so many ways to lose, and so few ways to win. As a matter of fact, once you break it down like that it's surprising that Jones isn't a bigger favorite.
My Pick: Jones. The line is closer than it's been for most of his UFC fights, but I'm still saving it for my parlay.

Somehow Ellenberger continues to fly under the radar. He beat up Mike Pyle and John Howard before briefly being named as an opponent for Jon Fitch, but now he has to take a step backwards and fight Rocha while Fitch gets B.J. Penn. But don't sleep on Ellenberger. If not for his very, very close split decision loss to Carlos Condit back in 2009, Dana White might be talking about him as another guy who's "in the mix" when it comes to the welterweight title picture. Instead he just has to stay focused against this dangerous submissions expert, and he should be able to snatch a third straight victory.
My pick: Ellenberger. As long as he doesn't get sloppy and leave his arm out too far when he's ground-and-pounding his way to a win, he's got this. Another entry for my rapidly expanding parlay.

Am I the only one who thinks that this fight seems like the UFC's attempt to help propel the very marketable Torres into the limelight now that the WEC is extinct? Banuelos just doesn't seem like much of a challenge for him, which is probably why he's the biggest underdog on the card. I see Torres announcing his presence in the UFC with authority in this fight, and I'm guessing that's exactly what the UFC had in mind.
My pick: Torres. Some online bookies are offering a more reasonable -350 line on Torres, but either way, he's better suited for the parlay as well.

- Ricardo Romero (-105) over Kyle Kingsbury (-125). These two are very evenly matched, and Kingsbury has the edge in quality experience. I still think Romero is the superior athlete.

- At -300, Chad Mendes is overvalued. I'm not saying I feel entirely comfortable about Michihiro Omigawa's chances, but at +250, and with his recent win streak, he might be worth small action.

- If you've been keeping score, my bloated parlay now looks like this: Silva + Jones + Ellenberger + Torres. You know what? Throw in Donald Cerrone (-280) just for fun.

- I don't care how tempting it is, do not bet on Christina Aguilera's headwear. Or on the literal flip of a coin. Seriously, what's wrong with you?