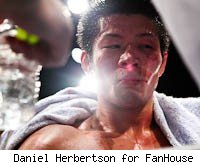 Sengoku Raiden Championship promoter World Victory Road released a bizarre statement on Tuesday via their official Web site, announcing the postponement of SRC 17 due to an article written by a member of the Japanese press.

The article in question, a seven-page interview with SRC featherweight champion Hatsu Hioki written by Manabu Takashima in March's Gong Kakutougi, said that World Victory Road's end-of-year "Soul of Fight" event was poorly organized, with some fighters not signing their bout agreements until the day of the fight or even post-fight. This is not uncommon, especially in Japanese MMA, and barely deserves any attention.

World Victory Road's response though, is mind-boggling. Its statement claims that it may lose the support of parent company Don Quijote if it is forced to postpone its April 23 SRC 17 event and is requesting a formal apology.

In the Gong Kakutougi article, Takashima says "SRC ended in success, but it had a lot of issues as a promotion. Actually, it seems like there were fight(s) contract settled on the day of the event. Also, the whole event was the mixture of real fights and exhibition matches. In the past, events that rely too much on fighter's efforts eventually collapse. I am putting the lack of effort by media aside for now, but I truly believe it is time to re-examine the power relationship between top fighters and promoters. It is not only for SRC, but also for Dynamite."

It is worth noting that the interview is presented in a question/answer format. The entire article is the dialogue between Takashima and Hioki and there is no editorial content. Hioki actually agreed with some of what Takashima said, but the SRC champion's opinions were not presented in the WVR article.

World Victory Road responded by saying that Takashima's claim regarding the contracts is entirely untrue and labeled his words irresponsible and groundless. MMA Fighting has been able to confirm however that at least one contract was not finalized until after the event. This was due to a late change of the contract but still, Takashima is correct.

The statement from World Victory Road then says that Takashima's article has caused SRC parent company Don Quijote to reassess it's support of Japanese MMA.

"Don Quijote, the parent company of SRC and a big sponsor of Japanese MMA, has stated that they are considering withdrawal of their support if this lopsided tone against SRC continues," the WVR statement claims. "We cannot understand why Mr.Takashima wrote such things knowing that Japanese MMA will not be able to survive without the support from large corporations like Don Quijote."

If Don Quijote pulled its money out of MMA, it would be catastrophic.

"Now, because of the above, we have to announce that we are postponing SRC17, which was scheduled to held on April 23, 2011. We would like to apologize to fans, fighters, and everyone who has supported us all this time," the WVR statement continues. "Mr. Takashima must acknowledge how improvident his act was."

Yes, the potential loss of the most important company in Japanese MMA and the postponement of a major event is the result of one paragraph in one article. If you are thinking that the reaction from World Victory Road is perhaps out of proportion with what Takashima wrote in his Gong Kakutougi article: you are not alone.

The real problem here is not the fighter contract issues. It is that Don Quijote'a Takao Yasuda is not feeling any support from the Japanese MMA community.

Sources close to WVR claim that the catalyst for this problem with Yasuda was Kamipro Issue 155, page 58, in which a trio of would-be comedians joked about how many empty seats there were at WVR's Soul of Fight. One said, "All that empty space was important in case of fire." The rather unfunny one-liner in Kamipro reportedly enraged Yasuda and left him wondering why he could not get any support from the Japanese MMA industry.

Yasuda's frustration with Kamipro is understandable as the Japanese magazine is famously FEG-centric and pays little attention to SRC. That is well known within the industry, but apparently not known by Yasuda. With the failure of Soul of Fight (Ariake Coliseum was around half empty) and Kamipro's jokes, Yasuda was left wondering why he has put his money into a sport that is not profitable and does not have a positive community.

World Victory Road staff were able to convince Yasuda to continue his support, but now that Yasuda has seen Takashima's Hioki interview he is again considering getting out. World Victory Road needed to prove that it is taking action to address its apparent media problem and Takashima is the scapegoat.

The response from World Victory Road is an overreaction to satisfy its owner and Yasuda's perception of the press is skewed.

If we are to take a look back at the negative press that New Year's Eve generated, members of the Japanese and Western media were especially brutal about the organizational mess at FEG's Dynamite. Todd Duffee's visa, the last minute DREAM interim heavyweight title, the Shinya Aoki and Yuichiro "Jienotsu" Nagashima special rules match and the Bob Sapp contract situation drew much more negative press than WVR's Soul of Fight did.

These Kamipro and Gong Kakutougi articles pale in comparison to the media that those FEG problems generated, but still WVR need to please Yasuda as the future of Japanese MMA is depending on him for support.

WVR has chosen poorly by attacking Manabu Takashima though. Takashima is one of the sports most respected and knowledgeable journalists. The problem here is that the media are mostly apathetic towards Sengoku Raiden Championship and attacking it will not generate the positive attention Yasuda desires.