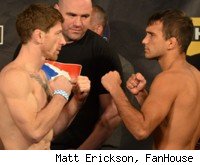 Brown, who was hoping to bounce back from a split decision loss to Diego Nunes at UFC 125, instead dropped a unanimous decision to Rani Yahya at the UFC Fight for the Troops 2. Brown is now on a two-fight losing streak and has dropped four of his last six, and it's fair to wonder how much the former champ has left.

Yahya snapped a two-fight losing streak of his own and looked good in the process. He'll be a fighter to keep an eye on in the UFC's new featherweight division.

"It was a very tough fight," Yahya said afterward. "Mike is a winner, he's a warrior. He's a 35-year-old warrior that took a fight on two-week's notice and fought at the last UFC, so he should get credit for that."

Brown landed a big right hand about 30 seconds into the first round, but the fight quickly went to the ground, which is where the jiu jitsu specialist Yahya wanted it. Yahya did a nice job of rolling on top of Brown, and for most of the rest of the round Yahya controlled the position. I gave the first round to Yahya, 10-9.

Brown landed a couple of hard punches early in the second round, but Yahya managed to grab Brown and climb onto him while Brown was standing. Brown took Yahya down and get on top of him on the ground, but he knew he didn't want to be on the ground with Yahya, and Brown stood up as soon as he could. Brown looked tired and slow when he got back to his feet, but he may have done enough to win the second round.

Early in the third round Yahya got on top of Brown on the ground, and Brown looked powerless to do anything about it. Yahya got Brown's back with two minutes to go and battered Brown with punches while Brown could do nothing but cover up. Referee Mario Yamasaki did Brown a big favor by standing the fight up and warning Yahya about punches to the back of the head, but Yahya went back to work and ended the fight back on top of Brown, landing more punches.