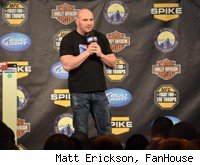 FORT HOOD, Texas – The UFC's light heavyweight division has long been considered by many to be the promotion's most competitive. And Dana White believes that is the case – and that some of his most notable fighters at 205 have crucial bouts coming up.

The UFC president, speaking Friday at a Q&A session for enlisted military personnel on the Fort Hood base, noted that former champions Lyoto Machida and Tito Ortiz are both in must-win situations in their next fights.

Machida beat Rashad Evans to win the light heavyweight title at UFC 98. He defended the belt with a controversial decision win over Mauricio "Shogun" Rua at UFC 104, but lost it to him in their rematch at UFC 113 last May – his first career loss. Machida followed up that knockout setback with a split decision loss to Quinton "Rampage" Jackson at UFC 123 in November.

Machida will fight UFC Hall of Famer Randy Couture, a former two-division champion, at UFC 129 in Toronto in April. A loss to Couture would be three straight for the Brazilian – which often signals a quick release from the UFC.

"He's had two losses in a row," White told the troops. "Right after he won the title, (UFC on-air analyst Joe) Rogan said this is 'The Machida Era,' and I thought so too. Then Shogun beat him, and then he just lost to Rampage. Now he's fighting Randy Couture in Toronto – and this is a must-win for him."

In addition, White said Ortiz, once one of the most dominant champions in UFC history, could be reaching the end of his career. Ortiz is scheduled for a main event fight on the UFC's Fight Night 24 card in Seattle in March against Antonio Rogerio Nogueira.

"Tito's got to win this fight to stay in the UFC," White said. "If he loses this fight, he'll probably retire."

Ortiz has not won a fight since 2006, when he won a split decision over Forrest Griffin. Earlier that year, he had a pair of TKOs against Ken Shamrock. At UFC 66, Ortiz lost to Chuck Liddell in an attempt to reclaim the light heavyweight title he held and defended five times in the early 2000s. A draw against Evans followed, his only fight in 2007. Then came a loss to Machida, his only fight in 2008. That fight was thought to be his last in the UFC courtesy of a highly public feud with White.

But Ortiz returned at UFC 106 after he and White settled their differences. He lost a split decision, though, to Griffin, his only fight in 2009. And in his only fight in 2010, Ortiz lost to his former pupil on "The Ultimate Fighter," Matt Hamill, at UFC 121. He has been plagued by back injuries, including surgeries in an attempt to alleviate the problems.

White also said the injury to current light heavyweight champion Rua has helped create a bit of a cluster in the division. Rua defends his title for the first time when he takes on Evans at UFC 128 in Newark, N.J., on March 19.

But White said it may be one of his former champions who is next up, despite many who believe a UFC 126 fight between Jon Jones and Ryan Bader will determine the top contender. Bader is unbeaten; Jones' only loss was a disqualification against Hamill for illegal elbows, a fight he was dominating.

"(The light heavyweight) division is interesting," White said. "There's so many guys at 205, (but) Rampage is probably next in line. Rampage is still in the mix. You've got Jon Jones fighting Bader, which is going to be a great fight that catapults one of those guys into the top five. The big problem with the 205-pound division has been, Shogun's injury has been clogging up the division. So now he's healthy and gonna fight, and we're getting everything rolling here."

Jackson is scheduled to meet Thiago Silva at UFC 130 in May. Silva beat Brandon Vera in a unanimous decision at UFC 125 earlier this month, chasing him from the UFC in the process.

In another potentially important fight in the UFC's light heavyweight division, Griffin and former middleweight champion Rich Franklin fight as the co-main event at UFC 126.