Dana White: Georges St-Pierre vs. Anderson Silva Could Happen in 2011 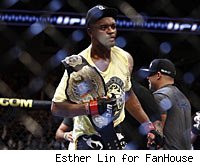 FORT HOOD, Texas – UFC president Dana White on Friday told a small group of troops at the Fort Hood military post in Killeen, Texas, that a long-discussed superfight could come to fruition this year.

Speaking at a question-and-answer session that was closed to the public and attended only by enlisted military personnel, White said a fight between welterweight champion Georges St-Pierre and middleweight champion Anderson Silva might take place in 2011.

Both fighters' dominance in their respective divisions would lead to the matchup, though White cautioned that both need to win their upcoming title defenses.

"If (Silva) wins that fight (against Vitor Belfort at UFC 126), then Georges St-Pierre needs to beat Jake Shields in Toronto (at UFC 129)," White said. "If that happens, then we're probably going to do that fight (between St-Pierre and Silva). If they both win, that fight makes all the sense in the world."

White also said in that scenario, he believes St-Pierre would move up from welterweight – and possibly even make that his new home. White did not elaborate on what would happen with St-Pierre's 170-pound title if that scenario indeed played out.

"Georges St-Pierre said he would move to 185 (to fight Silva) and stay at that weight and not go back to 170," White said. "Should (they) win (their next) fights, that fight will probably happen this year."

On most pound-for-pound rankings lists, Silva and St-Pierre alternate between the No. 1 and No. 2 positions and both have been at the top of most lists for years.

White has said on many occasions he believes Silva is the best fighter in the world. He has defended his middleweight title seven consecutive times, plus a win over Travis Lutter that was a non-title fight when Lutter couldn't make weight. In addition, he has two wins at light heavyweight against James Irvin and Forrest Griffin.

With a record 11 consecutive wins in the UFC, Silva (27-4, 11-0 UFC) was never truly tested until his title defense in August against Chael Sonnen. Sonnen dominated the first four rounds and the first half of the final round and was on his way to what would surely have been a unanimous decision victory. But Silva was able to work from his back for a submission, the only chance he had to win the fight, and forced Sonnen to tap with a triangle-armbar combination.

After the fight, Silva and manager Ed Soares said the champion was fighting with a bad rib injury, which they said explained Sonnen's dominance throughout the fight. In September, it was announced Sonnen had tested positive for performance enhancing drugs. He was suspended by the California State Athletic Commission, effectively nixing a likely rematch between the two. Silva next defends his title against Belfort at UFC 126 on Feb. 5 in Las Vegas.

St-Pierre (21-2, 15-2 UFC) has not lost since a TKO against Matt Serra at UFC 69, regarded as one of the biggest upsets in the history of MMA. That was St-Pierre's first defense of the welterweight title he had taken from Matt Hughes at UFC 65, ending Hughes' long reign in the division. St-Pierre got his belt back at UFC 83 in his home city of Montreal and has gone on to defend it five straight times – winning every round in the process with four unanimous decisions and a TKO against former lightweight and welterweight champ BJ Penn from a corner stoppage before the fifth round.

St-Pierre is scheduled to defend his title against former Strikeforce middleweight champion and recent UFC signee Shields at UFC 129 in Toronto, the promotion's debut in Ontario, on April 30. Shields beat Martin Kampmann by split decision at UFC 121 in his UFC debut to earn the title shot.