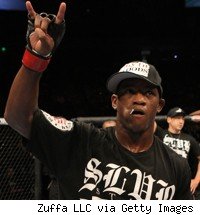 The UFC has announced that two fights on the non-televised portion of Saturday night's Fight for the Troops event will be streamed live on the promotion's official Facebook page.

"I'm always looking for ways to give fans fights for free and this is just another example of that," UFC President Dana White said in a statement. "Facebook is such a great tool for people to stay connected and we're excited to put two live fights on our UFC page for free."

The UFC, more than any other sports league, has used social networking to connect to fans. So from that perspective, it's easy to see why they'd do this Facebook deal. But the deal still seems a little weird.

Facebook isn't exactly known as a home of live sporting events. And there are still plenty of UFC fans who aren't on Facebook and therefore won't be able to watch. It also seems strange that the UFC wouldn't just stream the fights on its own web site, or add two more fights to the Spike TV broadcast and make the show an hour longer.

Still, this has to be considered good news for UFC fans.

The two fights -- Cody McKenzie vs. Yves Edwards and DaMarques Johnson vs. Mike Guymon -- should both be exciting, and more free MMA can't be a bad thing. Even if it's an unusual thing to tune in to Facebook to watch a fight.